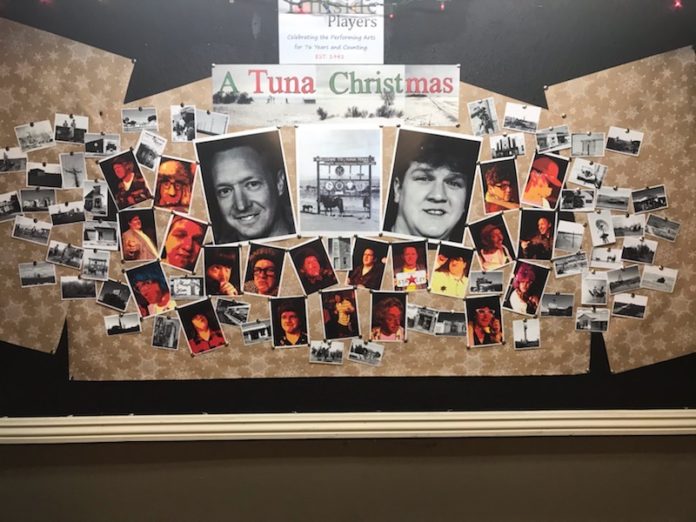 There is nothing fishy about A Tuna Christmas, a comedy written by Joe Sears & Jaston Williams, currently being presented at the Ramona Hillside Players. I caught it over the weekend and it is one hoot and belly laugh after another. I would swear they were smoking something stronger than field blossom when they jotted this down.

Combine slap-stick with vaudeville, add a touch of dramatic humor and you have the makings of a comedy that brought one roar of laughter another.
Frank Siebke, a veteran actor and director had this effort running on fast time from opening scene through the finale. Stage Manager Robert Norman, also a veteran actor/director, had sound, music, props and everything else riding along like a midnight flyer in Georgia.

There were twenty-two characters in the play, but only two actors who were constantly shifting back and forth from male to female to I suspect transgender and one suspicioned to be gay. Brad West and Josh Somers split the characters between them at a maddening pace over nine scenes in two acts.

The play opens with two hick radio announcers in Radio Station OKKK. It runs from there through Bertha Bumiller’s House, Didi Snavelt’s used guns, Aunt Pearl’s yard. After a 15 minute intermission we resume with Act II in Tuna High Gymnasium, The Tastee Kream (Tuna’s premier restaurant), back to Aunt Pearl’s house and a final scene where it all started with the two boys back at the OKKK microphone.

Along the way we are treated to scene after scene of power outages, angry wives, errant husbands and more hillbilly situations that one could absorb at once except for someone who might have been raised in “a holler.” The entire crew performed along with the actors in railroad time accuracy. If this play doesn’t whet your whistle or lubricate your digestive system then you need an overhaul not found in the real world. A packed house helped to make the season bright.

Matt Riggle will be directing Neil Simon’s “Come Blow Your Horn” during the weekends of March 13 through 15 and 20 through 22 and Sarah Gibbon will be holding auditions for Ken Ludwig’s “Leading Ladies” May 8, 9, 10, 15, 16 & 17 with auditions scheduled at the Playhouse on March 16 and 17 at 7:00 PM. I am constantly approached on the street and in coffee shops with the question, “Why isn’t there any entertainment in the Valley and why isn’t the paper writing more reviews with the small amount we have?”

We are often limited in space for reviews, but trust me there is plenty of every kind of entertainment in this valley. Maybe you guys should get over fear of driving at night and oblige yourselves a bit. We have plays and music everyplace around here from local coffee shops, bars and grilles. Playhouses and dinner settings etc. I cover as much as the space allows. Just sayin’