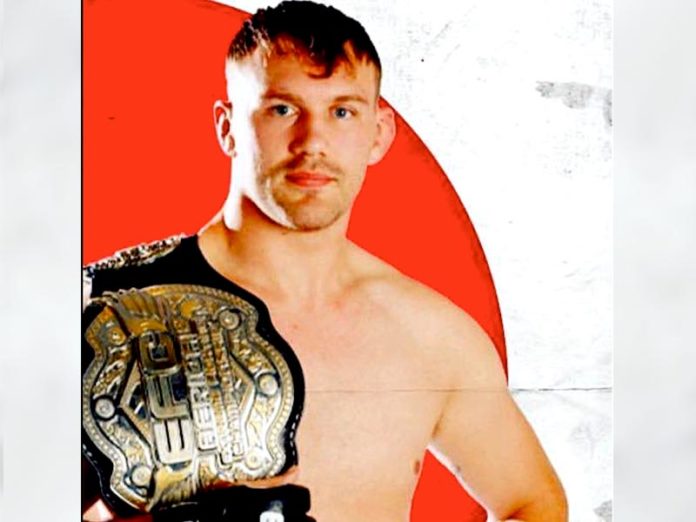 (Jared Vanderaa back in action)

With a professional record of 9-4, Jared Vanderaa can now be considered a “veteran” in a sport where most professionals only fight 3 or 4 times.  But Jared is on a mission: he wants to hear his name called by legendary announcer Bruce Buffer in the UFC. The sound of Bruce Buffer yelling in the mic, “It’s Time!” keeps Jared moving forward toward his dream even though his professional career has been full of adversity. Despite his professional record being 9-4, Vanderaa is a great fighter and his record doesn’t tell the whole story. Two of the losses were very questionable decisions-one where Vanderaa actually dominated the fight.  the other could have gone either way. Vanderaa also fell to a “Kimura” against Richard Odoms in the 5th round of one of the losses. Many of the judges and fans had Vanderaa winning that fight: he just got caught in bad position. It is very reasonable to imagine Jared Vanderaa being a 13-1 fighter, his sole loss coming from Renan Ferreira this past August due to a Triangle Choke in the second round.

Vanderaa was very much in that fight, the two heavyweights swinging away with serious power. Renan just looked to be bigger and faster with a longer reach than Vanderaa. “Stand and Bang” isn’t really what Vanderaa is known for: he is a wrestling & jiu jitsu fighter who possess very technical striking skills. Even though he will go out and brawl with people, that’s just not his game. Jared’s hand speed is amazing for the weight class. He doesn’t have that Walk-off Knockout power like Mark Hunt or Francis Ngannou. which he admits, “I just don’t believe I hit that hard.” I would call Jared Vanderaa’s fighting style the crazy love child of Stipe Miocic & Cain Velasquez. He fights best when he is landing precise jabs and punishing leg kicks, which both serve to set up his ground game where he is comfortable laying on a heavy “Ground and Pound” assault or seeking a submission finish.

Jared will wrap up his hands and strap down the gloves one more time this year, at a Smash Global (December 19th) event in Los Angeles, California. Vanderaa with be staring across the cage at a true, seasoned veteran of the sport: Tony Lopez. Multiple websites have Tony Lopez’s MMA record listed at 64-31.  That’s a lot of fights. He is also very active in the Kickboxing circuit. Tony Lopez is best known for his Karate style in the cage, with long legs and kicks that come from weird angles. However, he isn’t scared to throw a punch as he proved when fighting in Bare Knuckle Fighting Championship. Tony Lopez also has a submission arsenal in his back pocket. Out of his 64 wins 52 (26ko/tko & 26 sub) were finishes, with only 12 decisions.  It seems that Vanderaa is on the cusp of a UFC contract, especially since the UFC (United Fighting Championship) just welcomed LFA (Legacy Fight Alliance) into their Network. He needs to go into this Smash Global event and win in dominant fashion, get back into LFA and stack a couple wins in a row. Dana White will certainly have his eyes on this Young Heavyweight prospect and now it is his time to shine.

Search: Jared Vanderaa back in action