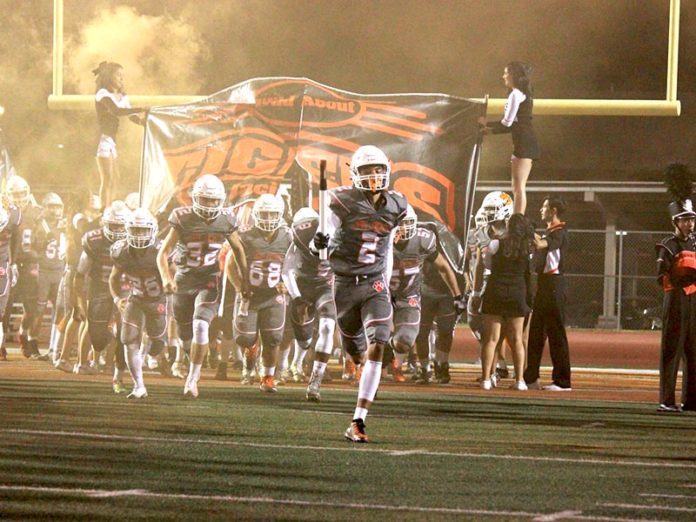 (Tigers Fall in the Semi-Finals)

Lack of Depth Catches up with SJ Against La Serna

San Jacinto jumped on the bus and headed to Whittier for the Semi-Final match up against La Serna who was ranked in the top 50 in the state. San Jacinto was ranked in the top 100. This was always going to be a tough game for the Tigers, but they felt like they had what it took to take La Serna down. La Serna got off to a fast start and scored in the first quarter. San Jacinto responded in the second quarter when quarterback Kajiya Hollawayne connected with the always dangerous Kameron Rocha for a touchdown.

The two teams went into the half tied, 7-7 and it was anyone’s game. Unfortunately for the Tigers, their offense couldn’t get much done and they would fall to La Serna 14-7. The Tigers defense should have their head held high after a game like that. Prior to this game, La Serna has never scored less than 28 points this season. This loss is impressive, especially considering what Coach Cogdil (defensive coordinator for the Tigers) had to work with this season. Mid-way through the season, Coach Cogdil lost one of his key defensive lineman and his secondary was basically a puzzle that he forcefully glued together on the fly.  Cogdil lost shut-down corner Davon Banks in the second week of the season. Another player who practiced with the team and looked to be a really good cornerback quit mid-way through summer.  Then Jordan McFrazier left the team midway through the season and Keith Hunter couldn’t finish the year because of a concussion he suffered against Citrus Hill.

A couple players from the offense had to come in and play for the defense. The most notable would be Antoine Sullivan, who was always willing to do whatever it took to win the game. Toriano King (Tahquitz Transfer) stepped in to play corner. At times, King looked dominant as a run stopper: he has quick feet and hits hard for his size. King is really good at stopping progress short, and hanging on to an offensive player until his teammates can join the group tackle. The problem with being such a great run-stopper is that his fakes completely catch you off guard. Although Toriano King was a huge help against the run game, he became a liability for the pass defense. In the four games he played for San Jacinto, he got caught “biting” on the Play-Action (fake handoff) and double moves from the receivers on a consistent basis. Kameron Rocha who has division-1 talent, dominated all year long, could only pick up so much slack. He wasn’t able to cover King every play.

(Tigers Fall in the Semi-Finals)

Kajiya Hollawayne had two interceptions, only 90 passing yards, and 50 running yards: a very underwhelming performance from such an electric player. This makes two games in a row that his play was less than what spectators have come to expect when showing up to a San Jacinto game. You have to wonder: were the defenses really that good?  Was Hollawayne just having a bad game?  Or maybe he is nursing an injury? The Tigers played deep into the playoffs last season.  Hollawayne competes in off-season 7-on-7 football, plays on the basketball team, and the baseball team. It’s entirely possible that his body was just running out of juice as the season began to wind down.

Either way, expect the Tigers to bounce back in a big way next season. They are losing some notable players on both sides of the ball, among those the offensive players include: Aj Ojeda (O-line), Juan Denny (RB), Antoine Sullivan (Wr), and Joaquin Osuna (O-line). Players graduating on the Defensive side include: Sheldon Newton (D-line), Mahe Hamala (D-line), LJ Vaifanua (D-line), Elijah Torres (DB), and Diego Sanchez (OLB). They are also losing a couple key utility back-ups who play wherever/whenever needed; William Stinnett and Scott Gordan.  But what is going to hurt the most is losing Kameron Rocha. Kameron Rocha dominated every opponent all year long: he plays in every phase of the game and is a game-changer on all sides of the ball. Rocha banked in over 450 receiving yards, 4 touchdowns, 69 tackles, and 12 interceptions. Among those stats are countless pass deflections/break ups, clutch catches, huge stops on fourth down, and huge first down conversions. Replacing him will not be easy for Coach Galliano and staff.

La Serna advances to play Pacifica in the finals next week.

Search: Tigers Fall in the Semi-Finals

Stud on both sides of the ball

Kyle Headlee - July 13, 2019
Get to know your San Jacinto Hardknock Kameron Rocha. Kameron Rocha is not an average athlete, he is naturally fast, agile,...