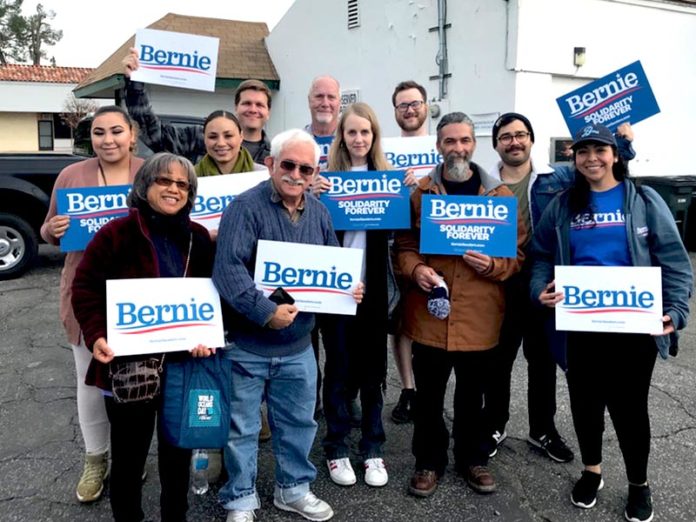 On Sunday, January 26, members of the community in support of presidential candidate, Bernie Sanders, gathered at the Democrats of Hemet San Jacinto at 530 ½ E. Florida Ave., Hemet, as part of their campaigning efforts to mobilize Sanders voters.

Volunteers from all walks of life, who’d like to see Bernie Sanders as the next President of the United States, were gathered Sunday for a canvasing event called “Knock for Bernie.”

Participants don’t just go randomly knocking on doors, they are using technology via an app to hone in on potential support, explains Castro: “We use PDI, an app that informs campaigners through a survey-that is where we keep track of whether or not they are leaning towards Sanders, if they are planning on voting, and if they’d be willing to request a Democratic ballot,” said Castro.

Each Sunday, participants meet up and fulfill two shifts: the first stretch from 10am to 1pm and the second shift from 2 to 5pm.

Today, Castro and her husband knocked on 43 doors during their first shift and canvassed approximately the same amount during the second shift – another couple managed 55 doors.

“We go out and volunteer our time.  We don’t get paid for this and we talk to registered voters,” says the elementary school teacher, adding, “Bernie is the candidate; he’s the only candidate with a comprehensive, equitable plan for public education called the Thurgood Marshall Plan, and so he has my support for that 100%.”

Castro first got involved with campaigning for Sanders through the local club, “Feel the Bern Democrats of Riverside County,” here in Hemet, and continues to do so, tirelessly. Her love for teaching, the climate, and higher education harmonizes well with the political policies that Sanders proposes, and believes it is imperative for young people to get involved.

Castro encourages those interested in campaigning to visit berniesanders.com, click on “Events” and enter zip code for a list of events from phone banking to crowd canvasing and knocking on doors.

Contributed - January 7, 2020
On Monday December 23rd, at the San Jacinto Health Center, approximately 60 people turned out to take part in the Seventh Day Adventist Church’s Sock Ministry, a program in which donated socks are distributed to the less fortunate.

Contributed - July 21, 2022
Effective July 16, Veterans have the option to Dial 988 then Press 1 to connect with caring, qualified responders for 24/7 crisis support.