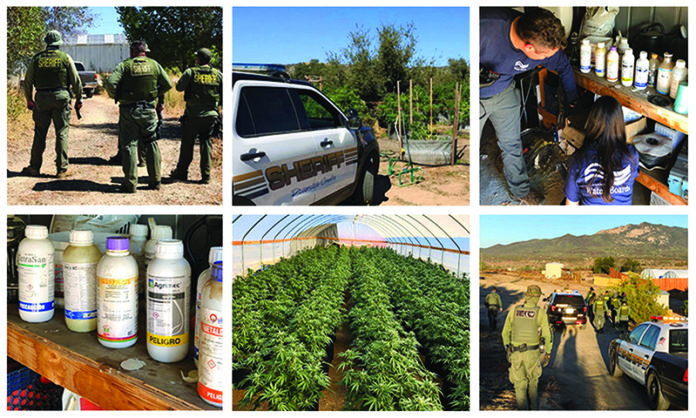 On October 7, 2019, personnel from the Riverside County Sheriff’s Department Hemet Station, Riverside County Sheriff Marijuana Eradication Team, California Department of Fish and Game, and the Regional Water Quality Control Board served nine marijuana cultivation search warrants in the unincorporated county area known as Anza. During the service, 4,131 plants and 1,029 pounds of processed marijuana were collected for a total of approximately 10 tons, $900 in US Currency was seized as evidence and two firearms were located, (all weights are approximate, the currency is estimated as it was placed in a sealed bag for counting at a later time).

Two suspects, identified as 68-year-old John C. Crieg and 61-year-old George Hanin , both Anza residents, were located at separate grow sites. Charges will be filed with the District Attorney’s Office for Marijuana Cultivation.

The Riverside County Sheriff’s Department’s goal is to keep all of our citizens safe while also improving the quality of life for those residing within the community. Marijuana cultivation negatively impacts the environment in several ways, including diminishing and poisoning the water table and pesticides adversely impacting the health of neighboring residents.  The Riverside County Sheriff’s Department has a zero-tolerance policy for these offenses. If you suspect drug activity in your area, please contact your local Sheriff’s Station. The Hemet Sheriff’s Station can be reached at (951) 791-3400 and the San Jacinto Sheriff’s Station can be reached at (951) 766-2400.

Associated Press - June 22, 2022
Jurors at a civil trial found Tuesday that Bill Cosby sexually abused a 16-year-old girl at the Playboy Mansion in 1975. The Los Angeles County jury delivered the verdict in favor of Judy Huth, who is now 64, and awarded her $500,000. She said the fact that jurors believed her story meant more than the sum of money or the fact that she didn’t win punitive damages.