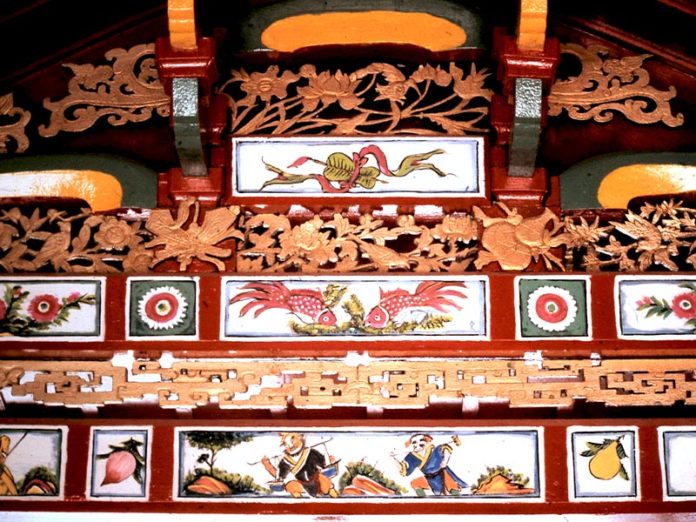 Singapore was one of our numerous ports of call on a marvelous, two-week cruise throughout South East Asia, on the venerable “Ocean Pearl.” Singapore is a 221-square-mile island at the southern tip of the Malaysian Peninsula. It has 57 outer islands that range from specks of sand to 15 square miles.

Since only from the decks of a boat can you really appreciate the dramatic skyline of Singapore, with its ultra-modern high-rise buildings, and the dynamism of the port, my husband Lloyd and I decided to experience a cruise on the “Fairwind,” a Chinese junk that used to be a workhorse plying the Oriental sea routes with various cargoes. Our Captain navigated the junk with a huge tiller, an oversized rudder and its masts were cut to allow us to go under bridges.

In bygone days, navigation was by the stars. Constructed without plans, by the “eye and the rule of the thumb” system, with ironwood called Giam, the “Fairwind” in its original form is stronger than steel construction. Safety facilities, and up-to-date amenities, were added to the vessel, and our junk was powered by engines for close maneuvering.

We sailed to 21-acre Palau Kusu Island, which was enlarged in 1975 by landfill and reclamation and changed from two tiny outcrops on a reef into an island. Kusu is one of Singapore’s Southern Islands, about 5.6 kilometers to the south, off the Straits of Singapore. The name means “Tortoise Island” or “Turtle Island” in Chinese and is also known as “Peak Island.”

According to some historical accounts, the earliest reference to Kusu Reef was during the 17th century when Dom Jose de Silva, the Spanish Governor of the Philippines, was alleged to have run aground at Kusu Reef in March 1616. The island then became acknowledged as “Governor’s Island.”

In 1808, the island was renamed “Goa Island” by a hydrographer at the British East India Company. Soon after Stamford Raffles arrived in Singapore in 1819, the island was designated as an orientation point for ships entering the new port. In 1822, a signal station, with a signal mast manned by the Harbor Master’s Department, was erected on the island. (While in Singapore, Lloyd and I went to the renowned Raffles Hotel and had their famous “Singapore Sling”).

The tortoise is a sacred animal to the Chinese. From local legends and folk tales, the story is passed down by both Malays and Chinese that a magical giant tortoise attempted to save two fishermen whose sailing boat foundered, and was wrecked while in the rough seas near Kusu, going down with the strong waves. The turtle changed itself into an island, to afford sanctuary for the shipwrecked fishermen who safely swam ashore. Marooned on the island, they subsided by living on shrubs and wild shoots, and their friendship continued until they died.

Of the two sailors, one was a Chinese, and the other belonged to the Malay community. The sailors were so indebted to the tortoise for saving their lives that the two men returned to Palau Kusu Island the following year to convey their gratefulness and thanks, according to their beliefs. Along with an enormous turtle statue, the Chinese sailor built a Taoist shrine, and the Malay sailor erected a Muslim shrine (Karamat), all honoring the deeds of the turtle. Since then, the island has been revered, and has become a place of worship. With its ancient Chinese temples, the island is sacred to both the Malays and Taoists.

At the top of a hillock are three holy shrines of Malay saints, that honor a holy and religious man, his mother and sister, who lived in the 19th century. Many disciples embark on a colorful and time-honored pilgrimage. They climb the 152 steps that lead to the kramats and extend prayers for good luck, good fortune, marriage, health, harmony, and happiness. The shrines are also popular with childless couples, who pray for children.

The devotees pray to the Guan Inn (the Goddess of Mercy and thought to be the “giver of sons”) for sons, and the Da Bo Gong (Temple of the Merchant God, or God of Prosperity) for wealth, good health, and peaceful seas.

On the ninth day of the ninth moon/month of the Lunar Calendar, between September, October and November, the popular Da Ba Gong Temple (meaning “Grand Uncle”), constructed in 1923 by an affluent businessman, and home to two main deities, is crowded. This month-long festival gets over 100,000 Taoist, Buddhist and Confucian pilgrims coming to Kusu Island.

Lloyd and I noticed dozens of turtles in the ponds and were told that turtles signify prosperity, and are the sacred charges of the Tua Pek Kong Temple. About 170 years ago, two holy men, Dato Syed Abdul Rahman, an Arab, and Yam, a Chinese, meditated and fasted on their pilgrimage to Kusu. Yam became ill during the trip, and Syed prayed intensely for him. The unexpected arrival of a boat with food and water saved their lives. As time went by, the two men visited Kusu, to extend their thanks. When they died, they were buried next to each other on the island. The Tua Pek Kong Temple and the Malay shrine were assembled and dedicated to their memory. Prayers are given to restore health, to safeguard the people from danger, and to pray for prosperity.

The island of Kusu has since become a holiday resort. Kusu is ringed by reefs, that circle the island with a marvelous variety of imposing hard and soft corals, and we saw an extensive variation of fishes and crabs that are rarely seen on other Southern Shores.

Kusu Island is also well-liked for two safe swimming lagoons, attractive and sandy unspoiled beaches and peaceful surroundings. Afternoons are enjoyed, along with picnic tables, barbecue pits, and shelters on the island, but camping and overnight visits are not allowed on Kusu Island.

Kusu Island once was called Pulau Tembakul, and during the colonial era, the island was a burial location for newly arrived immigrants who died while in quarantine on Saint John’s Island and the Lazarus Islands. Saint John’s is a southern island renowned for its history as a penal settlement but now is a holiday resort. Most ferries go to Saint John’s Island, which offers overnight accommodations.

Seventy miles north of the Equator, Lloyd and I found the climate of Singapore to be extremely humid and very hot, and it was 94 degrees F and muggy when we were there. With the weather, like a glorious year-long summer, Palau Kusu Island has an off the beaten track heritage and the status of being one of the most favored island getaways in Singapore. The blue lagoons, the tranquil atmosphere, and the splendid beaches made Kusu Island a perfect place for us to spend some quality time. 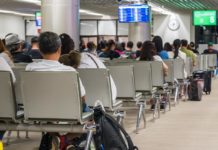 Thanksgiving travel rush is back with some new habits

The Murals and Stained-Glass Windows of Grace Cathedral, San Francisco

Arlene Lehtone - January 30, 2020
My husband Lloyd and I explored fashionable Nob Hill, San Fransisco, which was the center of opulent living in the last half of the 19th-century