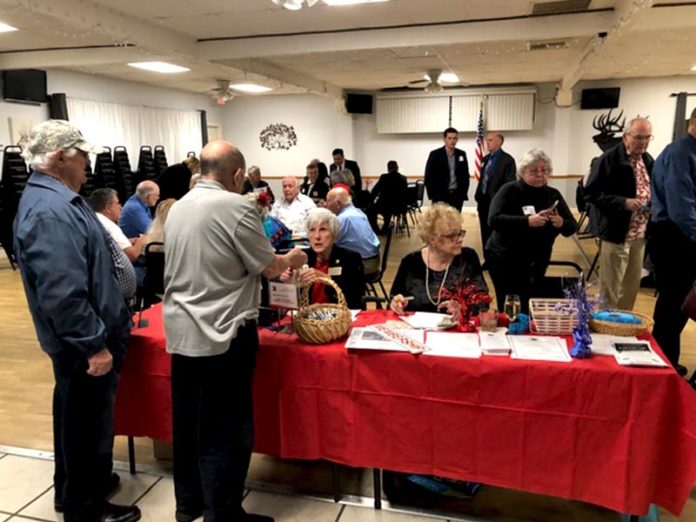 The California Congress of Republicans held a rousing meeting this Monday at the Elks Club.  The meeting featured many Republican candidates for various seats.

-The ease with which “Ballot harvesting” can lead to vote-cheating.

“Ballot Harvesting,” aka “Vote Harvesting” is a controversial form of collecting and submitting absentee or mail-in votes.  Since the voter can never be assured that their vote isn’t changed or thrown away (since the voter is not present at the actual voting place) the voter, and the system itself, can never be sure of the veracity of the vote.

To quote previous House Speaker Paul Ryan at a Washington Post event, “California just defies logic to me…I can’t begin to understand what “ballot harvesting” is.”  Some say it’s simple; it’s cheating, or at the very least, a system which easily invites cheating, which is why several states have banned the practice and several other states have bills pending.

Several candidates were stepping into politics for the first time or seeking to step into new roles.  “I am not a politician,” said Patrice Kimbler, candidate for 36th Congressional District (CD), adding, “but that’s why I’m running.  I am first and foremost a woman of faith and I answer to a higher calling.  We’ve had enough of career politicians.”  Kimbler said she is an active gun owner who covets her second amendment rights.  “Those guns are mine and not my husband’s,” she joked.

Lloyd White is a Beaumont city council member for 5 years and candidate for the 23rd Senate District (SD) currently held by Senator Mike Morrell.  “I spent the last 5 years in Beaumont.  The City Council there worked with the FBI and we uncovered a 60-million dollar scandal.  They ended up arresting our Chief of Police, our City Manager, City Attorney, all of our Department heads…they all pleaded guilty to felonies.  The city has gone from a bankrupt city to a fully productive and profitable city,” said White.

White, Developer of Web Applications for ESRI for 23 years, still works at the company. while seeking to serve in a higher capacity.  White counts taxes, transportation and infrastructure as his strong suits in the election.  “I’ve been on the Riverside County Transportation Commission for the last five years, and and transportation and infrastructure-especially in Riverside County-is something they don’t understand in Sacramento.  They are not helping Riverside and San Bernardino Counties with our transportation issues.  Those three things, and of course housing and homelessness are my highest priorities.”

When asked about the myriad voting problems plaguing California White has a simple, honest solution.  “Voter ID Laws.  All of those problems are fixed when we go to voter ID Laws.”

Accomplished International Attorney, Milo Stevanovich is also running for the 36th CD as a Republican, which is a seat currently held by Raul Ruiz, Democrat.  “I’m trying to bring a certain competence back to Congress.  Congress handles issues that are unique to that institution, but but they affect our district, they affect our state, our country and to some extent, the world.  These issues include defense appropriations, cyber security/cyber resiliency, the impact of new technologies on our labor force… and basically whether we are passing the kind of economic legislation that is going to hurt our district, our state and our country or advance us? I believe that we need someone who can handle those kinds of issues.”  Stevanovich has been involved in building economies in Europe, Asia, and the Middle East as well.

When Stevanovich came back to America, he was shocked at what he saw.  “While the rest of the world was adopting free-market principles and adopting the rule of law, which jump-started their economies and helped their people lead their best lives, we here have young people who are bringing to the fore this toxic idea of Socialism that the rest of the world is fighting to get away from.  And the rest of the world is looking to America to be the leader and that’s why they wanted advisors from America.  I was one of those advisors.”  Stevanovich is a former CPA, an international attorney who holds a Master’s Degree in Public Administration from Harvard and says, “…what I’m trying to do is “professionalize” our Congress instead of having 30 year-old bartenders making our laws.  That’s my skill set, my field.”

When it comes to the scourge of Socialism, Stevanovich says it’s simple.  “If you look at any country that’s been cut in two…whether Germany or Korea, where one adopted Socialism and one adopted Capitalism…you can’t say it’s cultural…or anything else…and you see which one prospered and which one didn’t, it’s clear.”

When it comes to “freebies” such as “free college” Stevanovich laughs and explains, “All that’s going to mean is that you’re going to have four more years of High School.  It’s going deflate the value of a college education.  A college education used to be a highly-prized thing, it was rare.  Now, that value has been deflated.”

The next speaker was Kelly Seyarto.  Seyarto is a retired firefighter with 35 years experience, retiring as Battalion Chief who also has two decades of City Council service under his belt.  Seyarto is running AD 67, a seat currently held by Melissa Melendez.  “While I respect the others seeking Melissa Melendez’s seat, I don’t believe they have the experience to go up to Sacramento and make a difference.”  Seyarto is also a four-time Mayor of Murietta.  “These were the years when we had to deal with the RCIP (Riverside County Integrated Project), the transportation and the environmental issues that we were being stymied with.  All of those things were things we had worked to overcome to try and help people who wanted businesses to get roads built, without being blocked by the Environmental Protection Agency (EPA).  There was just a whole lot of things going on and to take all that experience and not use it…I thought it would just be a waste not to use it at the level where it’s needed-at the state.  In spite of the partisan politics, there are a lot of things that can get done and we need to be able to understand what those things are and build a coalition of people who want to achieve those things done and solve those problems.”

When asked about the problem of Ballot Harvesting, Seyarto agrees that it is an invitation to cheat adding, “The real problem is that we have a two-thirds majority legislature in both the Senate and the Assembly…and then we have the Governor.  So I don’t know that they are so much concerned with “making it fair,” they’re concerned with making easily accessible to creating the desired outcome that they want.  With that two-thirds majority, you don’t have any reason to listen to what other people have to say and to compromise on a solution that might be better than anything either side might come up with.  It’s just partisan politics and they don’t even have to listen or to regard another opinion: they can just do what they want.”

The last important issue of the night was the “Bash for Cash” for the Hemet-San Jacinto Valley Republican Women’s Club Federated fundraiser for the group’s Scholarship.  The award amount varies, but the Scholarship os open to all High School seniors from all political backgrounds.  The fundraiser is being held on Wednesday February 5 from 4pm to 6pm at Sizzler.  20% of all dinner sales will benefit the Scholarship.  For more information call 951 658-2428.

Too Late for Censorship

Bob Franken - June 9, 2019
They say that even a broken clock is right twice a day. Like that broken clock, when President Donald Trump complained recently about social media censorship, he was...

Associated Press - April 15, 2021
PORTLAND, Ore. (AP) — Hundreds of farmers who rely on a massive irrigation project that spans the Oregon-California border learned Wednesday they will get a tiny fraction of the water they need amid the worst drought in decades, as federal regulators attempt to balance the needs of agriculture against federally threatened and endangered fish species that are central to the heritage of several tribes.