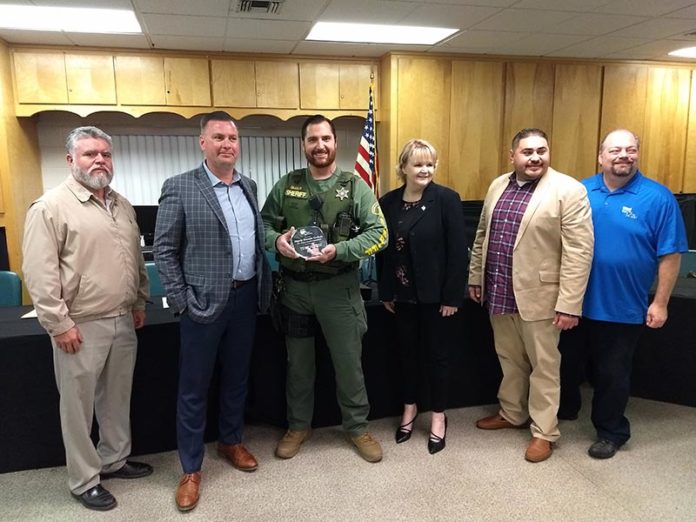 San Jacinto Corporal Jeff Hurd introduced his four-legged partner to the community, Tuesday February 4.  Yanik has been actively patrolling the streets for the last 4 ½ months, gaining experience and in that time has made about 35 surrenders.

Yanik has his own bullet-proof and stab-proof vest that was paid for through community donations. He is patrol certified in bite work and the detection of guns and humans.

Graham’s recognition comes with a promotion, but the talented, dedicated officer will not be leaving the San Jacinto area entirely; he will continue to serve in a different capacity as he’ll be joining a task force that not only serves San Jacinto, but also Hemet, Murrieta, Beaumont and Lake Elsinore area.  “I really appreciate the opportunity that was given to me by the station, the department and the city, so thank you very much,” says Graham.

Council took time to honor and recognize Leslie Moore’s time as Planning Commissioner of San Jacinto, a position she took on in February of 2018. Moore plans to remain focused on and continue to be a part of the betterment of the community.  “Thank you for all your service and the time you’ve spent for the city and all its residents . . . you’ve helped our city move forward through many challenges,” said Mayor Andrew Kotyuk.

Moore is planning to stay connected to the city and work through a firm in which she will take part in community outreach efforts to reduce criminal recidivism and childhood trauma. “Thank you so much for the opportunity,” says Moore. “It was a pleasure to serve. We are here locally and look forward to getting involved with the community even more.”

The city of San Jacinto is currently seeking citizens interested in serving on the city’s commission board. Applications can be found at www.sanjacintoca.gov