Native American Day is a holiday celebrated across the United States and in lieu of Columbus Day in California and Nevada. The holiday is traditionally celebrated on the fourth Friday of September, but in South Dakota and Wisconsin, it falls on the second Monday of October. Soboba Tribal Preschool teachers used this event as a teaching tool for an entire week.

Preschool Director Dianne King said the children always enjoy making crafts and necklaces to wear for the event. This year, things had to be done a bit differently.

“During a normal school year, we explain how these activities were used by their ancestors, such as pottery-making, beading, cooking and other Native traditions,” King said. “With our distance learning program, we sent the crafts home for the students with their weekly homework packets. This opens up an opportunity for each parent or grandparent to share their knowledge of Native history with their child in addition to the instruction from the teacher. It should be a great talking point for the whole family!”

The “Twos” classroom activities were created by teachers Anita Gutierrez and Lenora Mojado. One was the Little Bugs beading necklaces where the child takes a bead and puts it on a string which helps with fine motor skills to strengthen the small muscles in their little hands. Another one was making a small clay pot.

“One activity was making a drum, although the Luiseño Indians did not use drums but rather gourds/rattles,” Gutierrez said. “But this was a good way for children to hear the drum make some noise and talk about other Natives that use the drum for healing.”

Lastly, the children made dream catchers from paper plates and string, with beads attached. The parent-guided activity asked the child to lace the paper plate and add beads in the shape of a star to “catch bad dreams while someone sleeps” when it is hung near their bed.

“We could not get into much detail of their Luiseño Native traditions like making baskets or picking out a gourd and making a rattle, but we did simple projects for the two-year-olds to make and learn about other Native cultures and traditions,” Gutierrez said. “As a teacher at the preschool for five years, the curriculum was developed throughout previous years. I was always in charge of the pottery clay and Ms. Lenora, my co-teacher, was a part of the necklace beading. She has been at the preschool for two years and is a Tribal Member from the Soboba (Band of Luiseño Indians).”

Both teachers agree that it is great to be able to teach their students about different cultures while learning more about their own.

“Culture is a big part of the Soboba Tribe and it is a big part of me now that I’ve been here so long,” Gutierrez said. “And I enjoy working alongside a Tribal Member who is so passionate about her culture.”

For the three-year-old preschoolers, teachers Ana Garcia and Melissa Arviso sent home materials for children to do the following: create their own dream catcher, make small pots with modeling clay and complete a sand art project.

“As teachers, we had to get creative and come up with age-appropriate curriculum,” Garcia said. “Normally, we would concentrate on California Natives, but this year Ms. Melissa got creative and involved Tribal customs from around the entire country.”

Pre-kindergarten students got to make a dream catcher by coloring and lacing a mini-paper plate and adding feathers to the bottom of it. Teachers Amanda Vallin and Denise Acedo also provided modeling clay for the children to make their own pots and three coloring pages with Luiseño words of an eagle (a$wut), turtle (paa’ila) and bear (hunwut).

“We have two Native stories we read and uploaded to a video for the children to watch,” Vallin said. “We are trying to work on teaching the children more of their Luiseño language this year by including it in their learning of basic words based on the classroom’s weekly theme, colors, shapes and numbers. We also try to incorporate Native American music and dancing.”

Kindergarten teacher Cindy Lee said the online teaching format led her and Instructional Aide Antonia Venegas to rethink all the activities they would normally offer at this time.

“Usually we do crafts, stories and games,” she said. “This year, we did three crafts, one game and Ms. Antonia’s sons came in to rattle for bird singing. The three crafts were a clay pinch pot, dream catcher and a woven round basket. We picked activities that represented several Native American Tribes or were common among them.”

Lee said dream catchers have different origins and she shared one during class time that was from the Lakota Tribe. She said clay was used to make pottery by many tribes but mostly woodland Native Americans. It is also a natural resource that Natives could easily find and use. She said the children used paper to make their baskets as weaving baskets is a long-held tradition among the Soboba Band of Luiseño Indians.

“Our game was based on a common hand game (like Peon) and we simplified it by dividing the class into two groups (Ms. Cindy and Ms. Antonia groups),” Lee said. “We then used four circular pieces of wood with a happy or sad face drawn on each one. I went first and the other team had to guess what hand the happy face was in. If they guessed right, they won a stick. Ms. Antonia hid her happy/sad face and my team guessed and would earn a stick for a correct guess. The first team to win 10 sticks won the game. It was a bit challenging but fun to do online.” 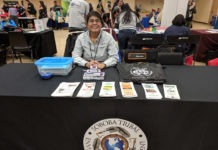 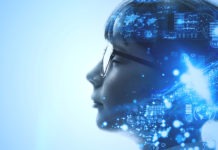 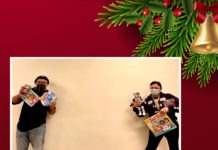 Barack Obama memoir off to record-setting start in sales

Associated Press - November 29, 2020
Former President Barack Obama's "A Promised Land" sold nearly 890,000 copies in the U.S. and Canada in its first 24 hours, putting it on track to be the best selling presidential memoir in modern history. The first-day sales, a record for Penguin Random House, includes pre-orders, e-books and audio.

Contributed - July 28, 2019
Join us for the Oldlympics! Registration for the 35th annual Oldlympics, a series of competitions for people age 50 and older,...