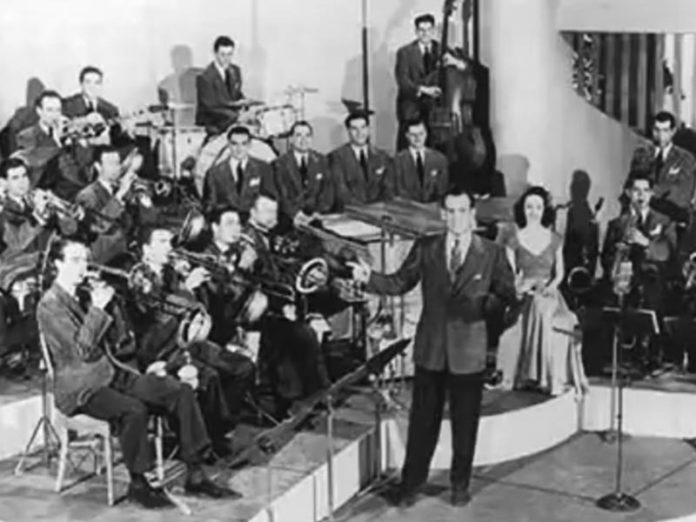 (The serenade of our lives)

I did some research recently on High School Prom Nights and came up with a not-so-surprising-to-me statistic about something that has been cherished for 80 years: a song written by Glenn Miller (with lyrics by Mitchell Parish) as a theme song for his great orchestra of the swing era. Moonlight Serenade is the most requested last dance song in high school proms across the nation.

I’ll bet 99 percent of those kids dancing to it today haven’t the faintest idea where it came from nor do 50% of their parents, who in weren’t even born when it was recorded on April 19, 1939 as the “B” side of a RCA Blue Bird label. The “A” side of the 78 rpm record was MIller’s “Sunrise Serenade.”

On December 15, 1944 Glenn took off from RAF Twinwood Farm in Clapham near Bedford, England on a short flight to Paris. His band preceded him and was waiting at the airport in Paris when news that stunned the world bellowed across the airways. Glenn Miller’s plane had disappeared over the channel and to this day, nobody knows what happened. The world had lost one of the greatest popular musicians and morale-builders who ever lived.

The youth of America, especially, wept.

Moonlight Serenade brings millions of young and old to tears, with a lump in throats as we remember the closeness of that last dance, as two hearts enfold into one across a dance floor as love blooms.

Alton Glenn Miller was born in Clarinda, Iowa of average parents on March 1, 1904, in the farm belt of America. He had nothing to distinguish him from any other young man except for his love of music. He took up the trombone when he was 16 and it changed his life. He deserted a college education at the University of Colorado in search of a musical career and played in various dance bands that toured the country in the late twenties and thirties. He also discovered, that he could produce musical arrangements. Swing orchestras that profited from his talents included Benny Goodman and both Jimmy and Tommy Dorsey. He collaborated with drummer Gene Krupa and arranged songs for the likes of Bing Crosby and Judy Garland.

Miller became best known for what has always been called “The Miller Sound,” which came about when he fused a clarinet playing the melodic line with a tenor sax and with three saxophones in the background, harmonizing with the same octave. On May 17, 1939 he was booked into the Glen Island Casino in New Rochelle, New York and became an overnight sensation. His appearance broke all attendance records when almost 2000 young dancers crowded the floor. By dawn, every music publication in the world knew that something big was happening. The young man from Iowa was collecting fans like women collecting flies in the amen corner of a church at a hot August revival.

I happened to be living in New York in September 1942 when Glenn gave his 2 hour and 45 minute farewell performance and I was right down in front when he said goodbye to us all with “Moonlight Serenade.”

Folks, Glenn related to the human condition and his listeners got it. He made us feel good about ourselves. He understood his audience. I can think of only one other person today who, like Glenn, will live long beyond the English invasion of the sixties, and Motown. That man has his great “E Street band” to support him. He sings. He sings from the heart to us all and understands the human condition. His music also plays to the heart and soul because he is one of us, coming from nowhere, but certainly reaching us all; that is Bruce Springsteen.

Isn’t nice to remember someone who was not related to us by heritage, but who had so much input into who we are and how we feel about one another? Just sayin’

Search: The serenade of our lives