(Be An Informed Voter)

From the Democrats of Hemet San Jacinto.

An article in “Psychology Today” leads off with the following paragraph:   “A staple of late-night comedy is having a camera crew pose simple questions to young people in the street and capture supremely ignorant answers. It’s your call whether this is funny, exploitative, or both. But such bits tie into some durable American credos: that people are stupid; young people are especially stupid; and we’re all getting stupider with each generation.”

Unfortunately there is too much truth to this statement. There are many factors that contribute to this phenomenon. I believe that one factor is the insufficient funding of our public schools which I will address in a future article. The way in which we get our “news” is another. Newspapers are a struggling industry. There was a time before radio and television when newspapers were the only source of news, of information and even advertising. Newspapers would go into depth on a subject giving lots of background and explanation of the headline. The news was not force fed. One could glance at the headlines and one could choose whether or not to read the detail.

Radio and television, on the other hand, had to choose what items to include. In the interests of appealing to a more broad public, more items would be included leaving less time for each item, less time for detail, less time for background information. Despite the attempt at covering a variety of items, in the interest of time, newscasts are unable to cover all the news of the day. I used to enjoy the newspapers. My grandfather was once the editor of the Niagara Gazette. I used to buy my paper from a newspaper stand along the street. Today those stands are almost nonexistent.

In recent years the internet has replaced both the newspaper and newscasts as the primary method in which many get their information. From newspapers we were able to glance at the headings of articles and choose what detail to read. There are fewer choices from newscasts and we get only the short version of many items in newscasts. The internet allows us to pinpoint our interests, to “Google” (really, technically, to “search-engine”) a specific subject. But we only “Search Engine” those items that catch our attention. For those of us on social media, our “friends” we have chosen and who share our interests, point us to limited items the end result of which narrows the information we absorb. Despite all of the new technology, we are becoming less informed as a population.

With an extremely important election coming we need to make an effort to be well-informed. It will take more than just clicking on topics of interest and you won’t be well informed if you watch or listen to only one station. Choose additional media. Add variety to your sources and make an effort to lengthen your attention span. There are so many critical topics like climate change, moral integrity of our Congress and White House, how the economy affects everyone, environmental safety, foreign policy, the fairness of our elections, the education of our children, access to healthcare for everyone. Pick a topic (or topics) and research them. Be an informed voter. America’s future is at stake. By the way, thank you for reading this article in this newspaper. You are among a dying breed!

Search: Be An Informed Voter 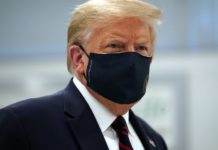 Despite Trump’s venting and threats, Biden’s win is sealed

Associated Press - December 10, 2020
There’s plenty of noise but no cause for confusion as President Donald Trump vents about how the election turned out and vows to subvert it even still.

Contributed - November 25, 2020
In support of President Trump’s historic commitment to lowering drug prices for American patients, HHS Secretary Alex Azar announced a drug payment model through the Center for Medicare and Medicaid Innovation at the Centers for Medicare & Medicaid Services that will lower Medicare Part B payments for certain drugs to the lowest price for similar countries and save American taxpayers and beneficiaries more than $85 billion over seven years.