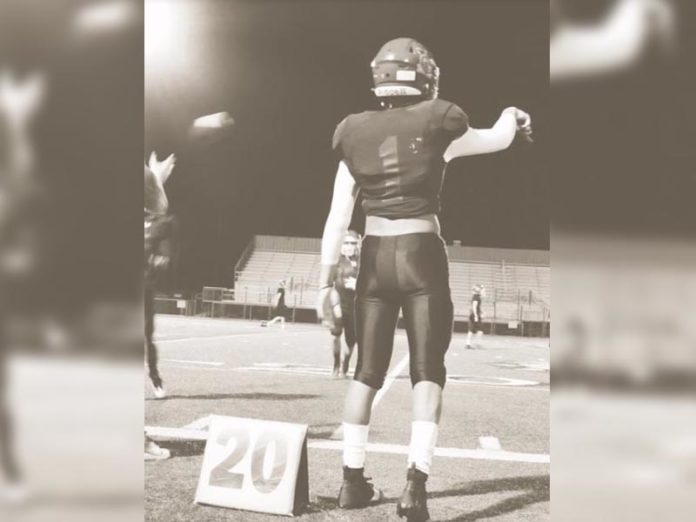 (Bulldogs Win In a Thriller)

The Hemet Bulldogs welcomed a tough opponent this week at home. El Rancho came into the game ranked in the Top 300 just like Hemet. On paper, it looked like it would be a defensive battle. Instead fans got a thriller. El Rancho’s Chris Andrade and Roman Rojas came out ready to move the ball In this game but penalties would be their downfall.

This game was full of back-and-forth action, both teams taking turns controlling the ball and taking the lead. The one thing Hemet has had going for them all season is a never-quit attitude. They keep playing the game until the final whistle.

Hemet had the lead going into half time, but El Rancho was going to do whatever it took to get back into it. Forgive the pun, but it was a DAWG FIGHT throughout. Hemet would eventually go on to win the game in the final seconds, with a final score of 35-32. But I’m getting ahead of myself. This game was a team effort to say the least.

Hemet’s safety Bradley Fye came in on offense and ran the ball four times, two of those good for touchdowns. Frankie Castillo (Hemet’s starting corner) was also needed on the offensive side of the ball and came up with a huge score towards the end of the game. These two outstanding players will share Player of the Game honors this week.

Hemet also seemed to figure out their kicking issue.  In the first round of the playoffs they missed quite a few field goal attempts and PAT’s. This week senior kicker Asaiah Aguilar went 3/3 on PAT’s.

Two Bulldogs came up with huge interceptions both from juniors. Malachi Jones had one and Jose Rodriguez had one late in the game to secure the victory.

Jeremiah Graves had a good game throwing the ball. He threw for 155 yards, 2 touchdowns, had an interception and also rushed for over 60 yards. The pass rush was giving him some trouble.  Next week the offensive line will need to be more in sync to give him time to make plays.

The Bulldogs showed that when push comes to shove, they have what it takes to win the game. With this victory they advance into the semi-finals next week. Our Mixtape MVP will be Hemet’s Frankie Castillo. Frankie had some key tackles on defense, big catches on 3rd downs, and he had the game winning touchdown with only seconds left in the game.

Search: Bulldogs Win In a Thriller