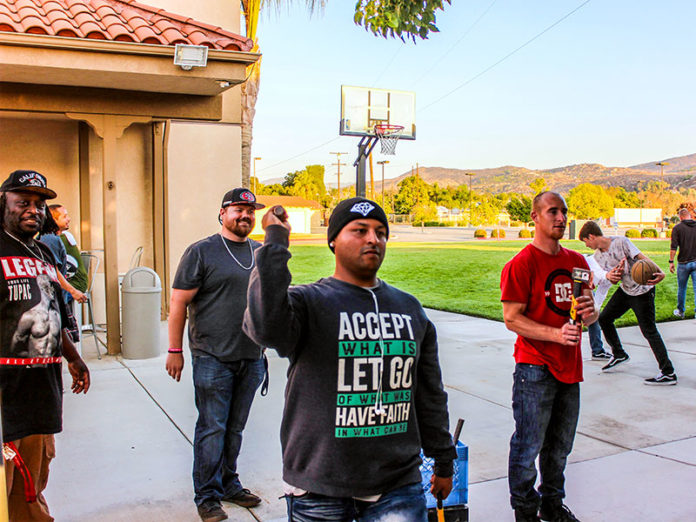 An Event Where All Were Welcome

DP City Church C3 (27100 Girard Street) hosted an event for the men of Hemet and San Jacinto. The tickets were very fair and the event only cost five dollars which is a bargain when you consider everything that was included. When walking up to the church, you were instantly greeted by groups of men who were excited to see you. Men were scattered around the property, talking with each other, laughing, and practicing for the competitions that were being held. The church had three events for men to compete in that were included with their initial ticket price. The first event was a free throw competition, then a darts competition, and finally they gave the men a chance to connect to their inner Neanderthal by having them throw Axes and Tomahawks at stumps of wood with targets painted on them.

Following the competitions, Pastor Bob Beckett gathered the men for prayer and opened up the table. The church ordered 1,000 buffalo wings from Buffalo Wild Wings. There were various flavors, so everyone could find something they like. The men sat down and feasted together. There were loads of fellowship, smack talk, and connecting going on while the food was being devoured. When dinner was over, all of the men were brought inside the sanctuary.

Professional Songwriter/musician Kreg Ferris led the group of men in worship. Kreg Ferris brought a very southern-country vibe to some popular Christian music you can hear on the radio today and sang one original song that rocked the building when Kreg took a deep breath in and let out a 12-bar rap that no one saw coming.

When worship was over comedian Scott Wood came up to the stage and destroyed the house, he told hilarious jokes that were relatable to men of all ages in the building. His punchlines came quick and witty. He even took a minute to riff on Pastor Bob and the men in the building started howling with laughter. Two or three of them fell out of their seats. Scott Wood continued to pile on the jokes until the night was over. He even gave the men in the audience a sneak peek at his new cooking show, “Something Smells Funny,” which will be a show that features famous stand-up comedians cooking a meal together.

All in all DP City Church C3 put on a great event for the men in Hemet & San Jacinto for a very fair price. It was an atmosphere that was warm and welcoming to men from all walks of life. Dwelling Place is planning a couple more events this year for the community. A free Harvest Festival/Trunk or Treat on Halloween night (5:00-7:00 pm) and an event for women on November 17th, mark these down on your calendar and get ready to attend these awesome events the church is hosting for our city.