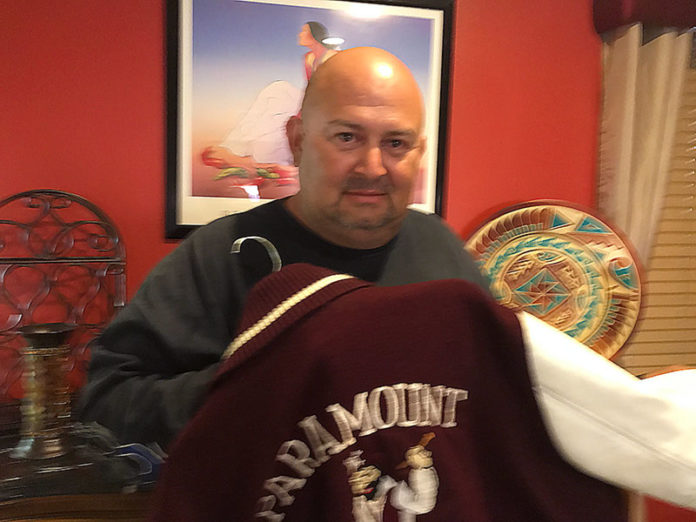 (Musicians come to the rescue)

PLANET GROOVE AND FRIENDS  GIVING BACK TO THE COMMUNITY

You never know where and when help will come to assist someone with needs.  The San Jacinto music community is abundant with musicians willing to step forward and give or raise money for good causes, and so it comes again that our locals are stepping forward to lending a helping hand.

Andrew Morales might be mistaken for a jolly green giant or holiday Santa Clause, but he happens not to be neither of those things.  He is a first-class musician, a drummer to be exact, and not just an ordinary drummer from a garage band. Far from it. He has played with some of the best-known rock bands in the country;

Shy to the core, he does not talk about himself in a bragging fashion, but he has the credentials, having played with some of the top popular bands in the country, but is more interested in discussing his upcoming event at Derby’s Bar and Grill.

“It is a fundraiser for the San Jacinto School District’s Music Department.  A few months ago we did a career day for one of the junior high schools, three pieces, playing in a gymnasium area and several students came up and asked technical questions about the mechanics of drumming.  My guys and I enjoyed it so much we began talking about a way we could do something for them. So, having been a high school drum captain in my marching band, I remembered how I was always in need of sticks and heads and many times found myself with inferior equipment due to lack of funds. Consequently, I turned to duck tape for patching my equipment.

“I always had an interest in helping and encouraging you musicians.  Even a few sticks and drum heads for the drummers, some reeds for the saxophones or other small needs were always appreciated. All of us wished there would be someone there to give us a hand with our instruments.  That would have enabled us to go out and verse the other high schools that sported more elaborate equipment.

“I know that kids in public education often get the short end of the stick when competing with charter schools and schools in high salaried neighborhoods.  I decided the best way to contribute would be getting together with other musicians that were back-up guys who sat in as sidemen with well-known bands and put on a show to raise money for the school district.  Musicians have toured with various artists. Folks don’t always know, but musicians have the biggest hearts around when it comes to helping young kids who want to be like them.

“I’ll be putting together nine pieces for this event with drums, percussion, bass, sax a singer, keyboardist, guitar and possibly a singer- something for everybody’s taste.  We even will bring in a couple of local musicians who want to give back to their home ton. We call the band Planet Groove. We will be playing all genres because our theme is so non-specific because we indulge in rhythm and blues, blues, rock, and so forth. Really good music and it doesn’t matter the genre.  We’ll have lots of guest stars.”

Andrew is heavily influenced by jazz and acoustic guitar.  “I attended a show where the headliner was acoustical. He’s a teacher in the Hemet Unified School District.  He blew me away. You may have heard of him. His name is Geoff Clark, plays a hellova acoustic guitar. He’ll have his spot on the show.  Nobody can touch him. He’s that good. I will probably have him do a couple of numbers with our band.” Actually, the more musicians he talks to, the more that want to be part of the show.

Andrew is originally from the Los Angeles area.  When he was about 8 or 9, and after that he says, “My mother was religious and used to drag me to the Pentecostal Church on Wednesday nights.  I figured if I had to be there, then I ought to listen and I did. One day the church drummer invited me up to join the band on the drums.”

He still remembers that his mother gave him such a pinch with all four fingers and a thumb and said, “You better get up there.”

“That was my moment, and I never looked back.  That first Sunday there were probably 225 people in attendance.  The spirit was bouncing in me that day.” He went through a number of scholarships, music school and different groups “I found it exciting playing a number of different groups and not just one for 3 or 4 months.”

He might have been a trumpet man, but after two years with the horn, he got braces, and that ended his career with reed instruments even after he has been a drum man. He is proud that in 1987 he played with the U.S.C. All-Stars in a packed Dodger Stadium before with 1700 other musicians.

“I was heavily influenced by the likes of Frank Sinatra, Quincy Jones, and especially Chick Corea, Boston, Kansas, and Ted Nugent for their beat and style.  Being Puerto Rican I able to fly with Salsa and Meringue.”

Just when you thought you’d heard it all, you ain’t heard nothin’ yet.

Search: Musicians come to the rescue

Contributed - July 15, 2020
The U.S. Department of Veterans Affairs (VA) announced it is partnering with MAZON: A Jewish Response to Hunger to improve and ensure Veterans have reliable access to food.