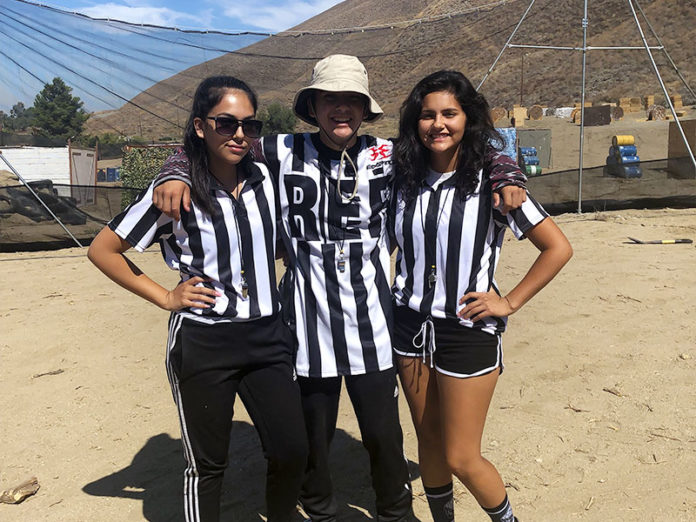 August held the grand opening of the new Soboba Flight Park’s Backyard Paintball Park in the City of San Jacinto. On deck for opening day was San Jacinto Mayor Russ Utz and city manager, Rob Johnson. Mayor Utz stated that “it’s rather exciting to see such a well-run and organized outdoor sports venue in the City of San Jacinto.” Also, on hand opening weekend was Ron Bryson, owner of Bryson Paintball in Downtown Hemet. “I was impressed by the turnout considering how hot it was in August. The season will certainly kick in as the temperature cools”, asserted Bryson. Bryson also claimed that “die-hard paintballers will come out regardless of the temperature.”

When the paintball park has special events, such as league play, holiday-themed fields, and an evening play, a portion of those proceeds will go directly to the Tinsel Triathlon Foundation. The foundation was put into place to pave the way so that no student or challenged athlete will go without participating in endurance and organized sports. The foundation, in the last year and a half, has supported Hemet High Football and Softball teams, West Valley High Soccer, Cops for Kids, T.H.E Center, and the Challenged Athlete’s Foundation, just to name a few.

“We didn’t just want to open a paintball park, we want to continue our longtime commitment to our community,” stated David Hall, operations manager of the park. Hall further declared that “we hope to see Mayor Utz out soon as he was a lucky raffle winner of a day of play and rental equipment.

Backyard Paintball Park is located 3 miles North of the new Soboba Casino Resort and adjacent to their adventure sports partner, Soboba Flight Park. They are open every Saturday and Sunday from 8 am to 4 pm. And when schools are out on holiday. They have top of the line rental equipment and a “no wait time, only playtime” attitude.

For more information, see them online at www.thebackyardpaintball.com, or 951-663-7054.

City of Hemet completes Stetson Bridge ahead of schedule and within...

Contributed - September 13, 2019
On September 8, 2019, the City of Hemet hosted a ribbon cutting in celebration of the recently completed construction of the Stetson Bridge, located along Stetson Avenue between Cawston Avenue and Warren Road.