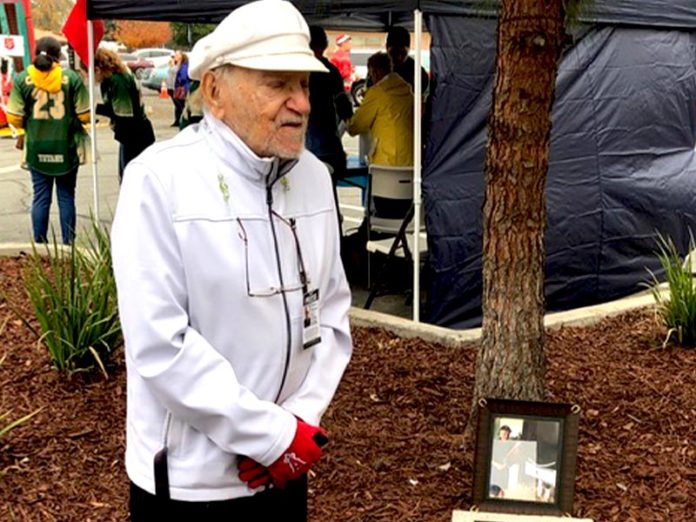 On Saturday December 15th, the City of Hemet honored the memory Rick Truskowski, by dedicating a plaque in his name beneath a Christmas Tree he helped donate to the community. Mayor pro-tem Linda Krupa and friends of Rick’s were laudatory in their comments regarding the kind of man Rick was, and how dedicated he always was he was to family and children and love his adopted city.  Yours truly spoke as well.

The plaque was donated by attorney Dave Angeloff and Marcus Menjivar to honor Bob Consultation, a rase horse they owned together with Rick who was an avid fan of horse racing.

In December 2014, Patricia Yepremian (a lady who is forever involved in half dozen community projects) decided it would be nice to celebrate Christmas with a Christmas tree in front of the Harvard Street parking lot. She began to scrounge around, with the City Council’s permission, to find a tree.

That took her to True Valley Hardware and Rick Truskowski.  Rick was also known as a civic minded citizen. He listened and promised to get back to her. A few days later she received a call from Rick.

He said, “I’ve got a tree and lights for your project, and they are already paid for.” At the first tree lighting it was real community event with bands, vendors and dedication in which the Hemet City Council participated.

Adding to Rick’s generosity to this community, a truck loaded down with boxes and boxes of Teddy Bears arrived for the big event. True Value Hardware provided those Teddy Bears to be distributed to the children of needy families..

That wasn’t all: soon loads of Christmas Trees arrived and were stored in empty stores on Harvard Street to be given out to families.

The tree has been celebrated every year since. However, a couple of years later when Rick was invited down to see the tree lighting, he was horrified to find that the city had “pruned” tree. According to Rick’s widow, Carolyn, Rick was horrified when he saw the results of such case of mismanaged barbering of the tree, suggesting that it looked more like a lollipop than a Christmas Tree. Needless to say there has been no more “pruning” of Rick’s tree.

For those who knew him, Rick Truskowski was always at the ready when it came to community needs. I remember one time when I happened to be in his store. He had driven down Florida Avenue and discovered that the American Flag flying high above the Hemet Museum in the Destination Coffee House and Bistro was becoming somewhat frayed from the elements.

He said, “That flag needs to be replaced. It doesn’t look good. I’m going to give them another one.”

That was Rick, a true friend and he is sorely missed. Such a tribute is well deserved.

Question to the community

Kyle Headlee - November 7, 2019
This week's question to the community is very simple and straight-forward. Given that the state of our city address was just delivered on 11/7

Contributed - April 1, 2022
The annual San Jacinto Rotary Club awards dinner that got put on hold for a couple of years due to the pandemic, returned March 21 to recognize six honorees who make a difference in their community. Among them was Marian Chacon who was named Soboba Tribal Elder and Community Leader for 2022.