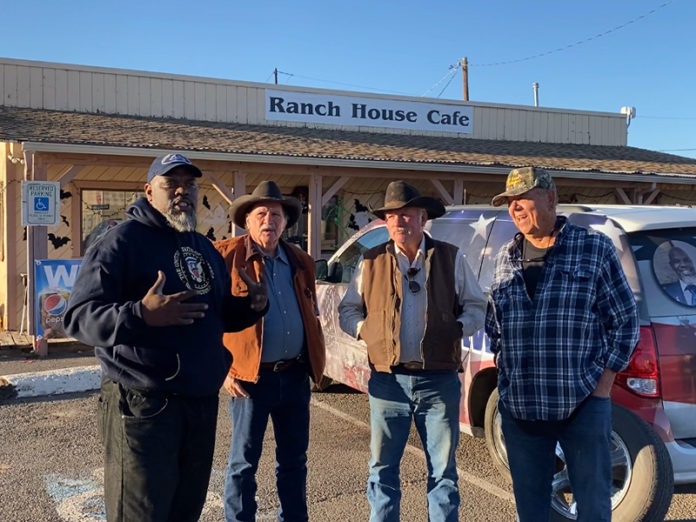 It was 1619, the ports of Jamestown would usually receive a cargo shipment from the British shores. However, this year would be different; the English settlers required serious help to cultivate their newly acquired land from the Powhatan Indians. Some historians would write it was a mutual agreement; however, the bloodshed of the natives and early settlers happened from the first arrival in 1607. The English settlers had learned of a slave ship carrying some 150 Africans to Portugal. In the middle of the night, the English settlers attacked the boat. Some 20 Africans were stolen and brought to the shores of Jamestown, Virginia. The birthplace of Slavery in America.

Her name was Angelo. She was the first recorded black slave name mention in the history of this country. It is now 2020, and we decided to travel from San Jacinto, CA to Washington, D.C., searching for racism. We decided to travel by car to cut the cost of a flight and to admire this country’s landscape truly. In the company for the trip, the mother of my children (we used to be married, that story for another day), our 7-year-old son Emmanuel, our 8-year-old daughter Narriah along with the Silva family. Our first night in D.C. was extremely remarkable. We arrived early Saturday morning after a 37-hour drive. We showered, changed, and headed to the White House. President Donald J. Trump had his first public appearance since announcing he and First Lady tested positive for Covid-19.

The event was special given the organization “BLEXIT,” which stands for Black Exit, a group formed by Candance Owens to encourage Black America to leave the plantation of the Democratic Party, was present. We did not attend because our arrival was a few hours later than the event had begun. When we pulled up to the front of the White House the first thing we noticed was a block-long Black Lives Matter mural painted directing you towards the White House lawn. Our nation divided and in search of some real healing. If you yell “All Lives Matter, “you’re automatically labeled a racist. When you scream “Black Lives Matter,” somehow you are more aware of social injustice in this country.

Both sides yelling, I have a right under the First Amendment, ironically offended at each other’s rights under the same protected law. It wasn’t until I walked to Sherman Park I completely understood my purpose for this trip. There on a bench was a copy of a children’s book titled “The Crayons’ Book of Colors,” which tells the story of colors in one box coming together to paint a beautiful picture. Could the answer to racism be this simple as reading a children’s book? The moment we arrived at Jamestown, I felt a sense of trepidation come over me. I can only attribute to the drive towards the location. My mind could not help but imagine the many Africans running through the thick of the trees searching for freedom.

You can feel it in the atmosphere, this land has a story, and it is not beautiful. The trees nourished with blood and sweat of many Africans and Native Americans. We arrived. The overcast brought a much-needed surreal ambiance. The water rushed towards the shores, and for a brief moment, it seemed as though a cargo ship carrying 20 Africans was soon to dock. It was my imagination; it is October 2020 and not 1619. My heart was slowly finding its rhythm. I could not help but wonder how it must have felt having your family snatched from one another, young children driven from their parents to be stood on the auctioning block never to be together again. Here I am standing in the same place 400 years later.

I gazed at my children, then quickly turned away to wipe the tears coming down my face. I admit it now; I cried a lot during this trip. No dogs were barking; no slave owner was coming to purchase our family. We left that place today as free men and women. It was after the writing of the Declaration of Independence in 1776; our country declared war. Imagine being in a place a few miles from the birthplace of slavery to the victory that birth the nation. The great battle of Yorktown was less than 20 minutes. Away from the place of the most significant theft in American history.

Few people have learned about the Black Patriots of the American Revolutionary War. Nevertheless, Crispus Attucks, according to president John Adams, was indeed an American hero. He was a man of African and Native American Descent and was killed during the Boston Massacre and considered the first to die during the war. Over the next 400 years, we have fought side by side for this country. Many are the trying moments this history has endured, from the emancipation of slaves to the unbending laws during reconstruction to the Jim Crow era. Our country has seen its ugliest years. My children asked me while looking in the casket of Emmitt till a 14-year-old back kid brutally killed for whistling at a white woman, “why would they do this to black children? I’m not ready to answer their innocent question; I want them to learn for themselves and see how far this country has come. My trip took us to some of America’s most rich history.

We stood in Independence Hall, where the founding fathers signed the Declaration of Independence. We learned that the Liberty Bell would ring until America abolished slavery. We rode a ferry to Ellis Island and knew the story of 12 million immigrants that entered this country. We stopped by to wave at Lady Liberty, only to discover her image was a symbol against slavery. We walked the steps of the Lincoln Memorial and stood next to the statue of Martin Luther King Jr. This Country birth the Ku Klux Klan and the Black Panther Party. We have witnessed groups of hate assassinate Democratic and Republican presidents on this soil for ending slavery and the right to vote. We can hate and love this country simply because of its history.

The moment we walked into the Twin Tower memorial area and stood over the waterfall of where the buildings once stood, we felt the pain of the brutal attack. Remember how united this country had become during the weeks following the planes crashing into those two-buildings, killing 2,996 Americans? Walking through the halls and reading the names of every person killed and seeing the country support for law enforcement and first responders reminded us of the possibility of unity in this land. We must have forgotten, even though we said we never would forget.

We headed home, and it seems our trip was more painful than memorable. How far have we come? Media has painted this dark message of systemic racism and that we have not reached equality for all people. So many friendships have ended in 2020. The block and unfriend/unfollow button has selected more than the “like” emoji. “Wear your mask and save lives.” “Don’t wear a mask and be free.” So many narratives in the year 2020. Are we still a racist country? We did not drive 7,633 miles and to not find an answer. The sound of a blown tire is the last thing I wanted to hear after driving back across the country to get back home. Here we are, 365 miles from home, and the tire blows out. It’s 4:30 in the morning. It’s dark in the town called Ash Fork in Arizona. It took a while with semi-trucks rolling downhill, but I changed the tire, and we drove to the first nearest exit. It’s now 6am, and nothing is open.

The local tire place doesn’t serve the customer until 7:30am. So we decided to get breakfast. The Ranch House Cafe seemed interesting so we drove over and parked and walked into the local establishment. The look on the four gentlemen’s face revealed what was in their minds. “Where did this black gentleman come from, and why is he here?” I wondered if they were racist. Could this be the defining moment of my trip? Did I drive past this place to only come back to learn what I was in search of was so close to home? Yes, one of the men was wearing a Trump hat. Being a Trump supporter myself, I thought I would break the ice, “Yes! Trump supporters!” I spoke, ‘I’m in the right place.” Looking back at the moment now, I wonder if they thought I was antagonistic. They didn’t know I was a patriot and I can understand why; the media has done a great job putting America against itself. It was a brief silence.

I asked, “Do you guys serve breakfast?” “Not until 7:30,” one of the men responded, “but we do have coffee.” That was it. It was a hot cup of coffee, and the atmosphere that seems hostile in my mind was comforted and subdued. We began to talk about my trip and what I was learning, crossing the Mississippi River to Washington, D.C…the time passed us by quickly and the tire place opened. Unfortunately, they did not have my tire size, and that’s where I learned how racist this country could be, according to social media reports. No way should we drive 365 miles on a spare. It’s Sunday, and Arizona had few tire places opened. That’s when one of the gentlemen asked the tire size. Can you believe it, he just happened to have the right size and rim? He drove home and brought back the tire. While the tire place changed our flat, we helped ourselves to some corn beef hash, biscuits and gravy. The food was delicious. They paid for our meal and thanked us for being real patriots in this country that was divided.

We may be a nation torn at the moment but I see healing on the horizon. Your vote for Trump or Biden matters to you. Amid the Civil War, Abraham Lincoln argued and had the emancipation signed. During the bombing of Churches that killed four little girls and watched many Americans snatched from the counters of J.W. Woolworth, Lyndon Johnson signed the Civil Rights Act. When George Wallace yelled Segregation today, tomorrow and forever, we saw this country rise and sign the Voter Rights Act. The blood spilled in the soil of this nation could never be forgotten.

The Native Americans explored before the European attacked on this soil can never be overlooked. When you look at the past, you can be both ashamed and proud of this nation. When I arrived home, I realized we are far from where we started. It’s time we stop fighting the ghost of this past. It’s time to come together, so we will no longer repeat its history. It’s time we bring our difference together to make a difference. The way God intended us to live. It’s time we paint that beautiful picture from “The Crayons’ Book of Colors.” – @sirblackpatriot