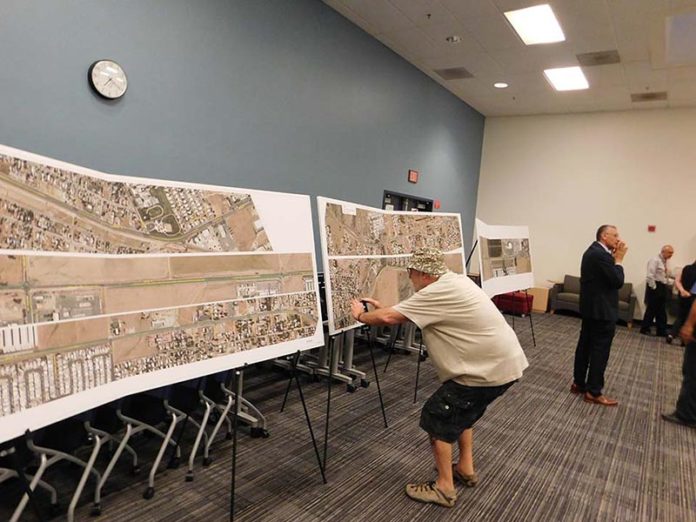 Tuesday, January 14th at the Hemet City Council meeting, 30-year-old Kimberly Soukseum spoke on behalf of her family’s owned and operated Gas Mart, which has seen a steep decline in profits since the development of the Caltrans’ SR-74 median project, hindering customer’s access to the business.

“Closed” signs hung in the window of Gas Mart as the family of three were present at Council Chambers Tuesday evening. Soukseum addressed the Council, saying: “Since the median curb divider project has been underway, we’ve noticed a significant decrease in customer business – almost 50%.”

The reason, she explains, is the median blocks westbound traffic from making the left turn onto Western Avenue – a direct access point to the business and its gas pumps. Instead, customers are forced to turn left onto Hamilton, then double back – turning eastbound onto Florida to reach the business – or, maneuver a risky and illegal U-turn. Many customers aren’t willing to go through the trouble and so have taken their business elsewhere.

“We humbly request that the city take action to help us continue to thrive in our community by keeping the cross street of Western Avenue open to cross traffic . . . to allow our customers to continue to pull into our business without safety issues, and to help us to sustain ourselves financially as contributing members of our community,” Soukseum said.

The “mom-and-pop” Gas Mart, located at 1005 W. Florida Avenue, has been at its location for 17 years and relies heavily on customer loyalty. It offers competitive gas prices, but co-owner and Mother, Syda Sounakhene says, “If it continues like this, I don’t know how long we’ll be here . . .we’re just trying to survive.”

The SR-74 Median Project, according to Caltrans, is meant to lessen head-on collisions and maintain traffic flow.   Hemet residents are wondering what “head-on collisions,” as none can remember any such accidents in town.  Implemented in early July, the median is planned to stretch 5 miles, from Acacia Avenue to Ramona Expressway.

Caltrans spokeswoman, Joy Schneider says, “Caltrans doesn’t believe that we’ve blocked access from any of the businesses. We understand that raised curb median is a new condition that will take some time to get used to. We do think, in the long run, the safety of state route [74] was imperative for us to improve.”

While it’s important to keep traffic flowing and our routes safe, is there a way for businesses and the state to strike a happy medium?