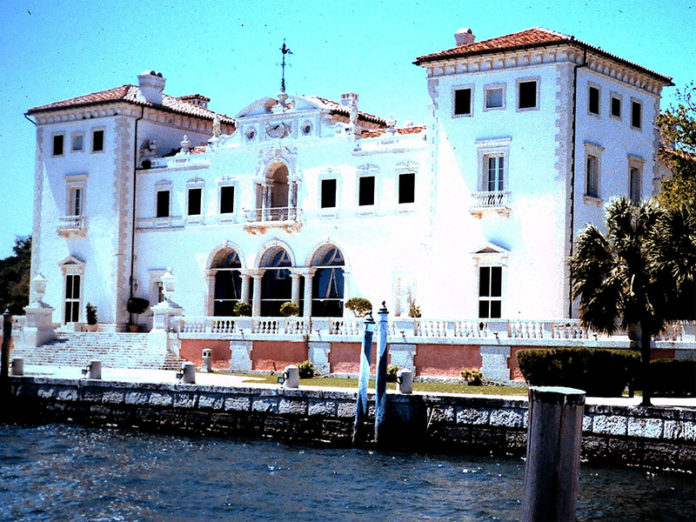 My husband Lloyd and I drove our rental car along a wide avenue, with expensive-looking houses on one side, and a high, coral-colored wall on the other side. A meandering road guided us alongside an exuberant natural hammock (jungle forest), and through a wrought-iron gate in the wall, we saw the impressive Villa Vizcaya. We found it closed, due to a special function, the King and Queen of Spain being here, along with television crews, so we were given free passes and returned the following day.

Vizcaya began as a 180-acre estate, of shoreline mangrove swamps and thick inland native tropical forests, which Deering conserved by developing the estate section along the shore.

Deering started construction of Vizcaya in1912 officially starting occupancy on Christmas Day 1916 when he arrived aboard his yacht “Napenthe.” The villa was built mainly between 1914 and 1922, costing $15 million, while the construction of extensive elaborate Italian Renaissance gardens and the village continued into1923.

Deering created a self-sufficient antique Italian estate out of what was wild Florida marshland, to look like an ancestral home, lived in by a noble Italian family for 400 years. It was representative of a northern Italian village, with a dairy, poultry house, mule stable, greenhouse, machine shop, paint and carpentry workshop, and staff residences.

The Villa Rezzonico in Venice, Italy inspired the east façade of Vizcaya, facing the Bay, with its immense stone barge. Copied from the one at Isola Bella on northern Italy’s Lake Maggiore, the barge is decorated with obelisks and statues of nymphs and mermaids. The landing stage is enhanced with Venetian-style gondola mooring poles. In Deering’s day, he and his wealthy friends arrived in their yachts, for their first dazzling sight of Vizcaya.

Porous, perforated stone (coral and volcanic rock) was used for architectural adornment, to give the impression of age. Native materials, such as limestone, which is still used by Florida architects, give the house a distinctive look. Imported French and Italian garden layouts and elements employed in Cuban limestone stonework with Floridian coral architectural trimwere mingled. Sub-tropic compatible and native plants that flourished in the habitat and climate, were planted.

Deering called his estateVizcaya, Basque for “elevated place,” because the northern Spanish province Vizcaya is along the Bay of Biscay, from which Miami’s Biscayne Bay takes its name. For the estate’s symbol and emblem, Deering chose caravels, the Spanish ships that came to Florida to replenish their water supply, during the “Age of Exploration” on their travels of conquest and discovery. A depiction of the mythical explorer “Bel Vizcaya” greeted us at theentrance to the property.

South Florida’s love affair with everything Mediterranean began when Deering completed this sumptuous villa, which now is one of south Florida’s most impressive historic sites. Sumptuously furnished with European decorative arts characterizing the Renaissance, baroque, rococo, and neoclassic eras, from the 15th to 19th centuries. The outstanding rooms are festooned with decorative elements and furnishings that cover over 400 years.

Each side of the marble terrace along the Bay is a seawall, leading to a trellised teahouse. We noticed that the south loggia’s tea-room has exotic canvas panels on the walls, an extraordinary marble floor, and fantastic wrought-iron doorways.

We learned that Italian Renaissance design expects the house to flow into the outdoors in an unbroken line of visual pleasure, increasing the scenes yonder. Vizcaya is so authentically Italian, that it can compete with renowned Renaissance palaces.

The superbly appointed interior of Vizcaya has a central courtyard, enhanced byferns and statuary. The high ceilings and open-air courtyard welcome the sea breezes, but the salt spray and humidity harmed the interior furnishings, the enjoyable climate having a damp saltiness, eating away the porous limestone. In 1987, a climate-control system was installed, and the courtyard of the once open-air Villa was enclosed with a glass skylight to safeguard the treasured furnishings from the weather. This was completed in time for the historic get-together at Vizcaya, in September of that year, when President Ronald Reagan received Pope John Paul II. They metin private on the first afternoon of the pontiff’s historic tour of America, the Pope’s first visit to Miami.

Vizcaya’s unsurpassed and superb beauty has captivated the world’s utmost dignitaries. Queen Elizabeth of England visited in 1991, and in 1994, President Clinton hosted 34 leaders of the Western Hemisphere at the historic Summit of the Americas. In 1994, the important First Summit of the Americas, convened by President Bill Clinton,began a series of Summits of the countries in the Americas. The leaders that gathered at Vizcaya formed the “Free Trade Area of the Americas (FTAA) that all the hemisphere’s countries (except Cuba), could join for national and corporate trade benefits.

The exquisitegrounds are over ten acres of expansive formal gardens, pools, and fountains with sculptures, and distinguish Vizcaya with an Italian Renaissance villa. We saw and heard splashing water all over the estate. In the Fountain Garden, we noticed peacocks perched on their fanciful vine-clad statues and pedestals. The shadedwalks have glorious old oaks, dripping with Spanish moss. Meandering pathways led us to small theme gardens, divided by hedges and walls. There was a maze, fountain gardens with their exotic and various plant life, and anorchid collection of about 2,000 specimens.

We went to romantic grottoes, with shell-encrusted masks sculpted out of coral. The fanciful caves of the grottoes, with their stone waterfalls, are occupied by gods and nymphs, and we saw many of the huge giants, carved of native limestone.

Deering used Vizcaya as his winter home from 1916 until his death in 1925,dying September1925 on board the steamship “SS City of Paris,” while returning to the United States. After his death, Vizcaya was inherited by his two nieces. After hurricanes and growing maintenance expenses, they began selling the estate’s surrounding land potions and outer gardens. In 1945, they sold segments of the estate to the Catholic Diocese of St. Augustine, Florida, to build Miami’s Mercy Hospital, retainingfifty acres, including the main house, the formal gardens, and the village.

In 1952, Miami-Dade County attained the outstanding villa and formal Italian gardens, now called the Vizcaya Museum and Gardens. In 1994, the Vizcaya estate was selected as a National Historic Landmark. In1998, in conjunction with Vizcaya’s reaccreditation procedures by the American Alliance of Museums,the Vizcaya Museum and Gardens Trust were established to be the museum’s ruling organization. In 2008, the National Trust for HistoricPreservation recorded Vizcaya as one of America’s Eleven Most Endangered Historic Places, Vizcaya’s presence on this list being founded on the menace of planned high-rise expansion on adjacent property. On April 18, 2012, the AIA’s Florida Chapter positioned Vizcaya on its list of “Florida Architecture.”

In March 1971, three individuals stole approximately $1.5 million in artworks and silver articles. They were arrested three days later, about $250,000 of the stolen goods being recovered, and most of the precious items stolen were never recovered. Included in the theft was a silver bowl that once belonged to Napoleon Bonaparte and was essentially priceless.

The estate, now established officially as the Vizcaya Museum and Gardens, consists of 50 acres with the villa and the gardens, and the remaining native forest. Ten acres encompass the Italian Renaissance formal gardens, and 40 acres are the native “hammock,” and miscellaneous.

The Villa’s museum contains about 34 rooms of distinguished architectural interiors, adorned with numerous antiques, showcasing over 2,500 art objects and furnishings, with an emphasis on 15th through early 19th century European decorative art and furnishings. Among those furnishings are ceramics, the originals of which were sent from England in 1912 but sank along with the “Titanic.” Fortunately, Deering had taken insurance and had them replenished.

Vizcaya’s genuinely Italian, spectacular Renaissance-style villa and formal gardens can effortlessly compete with the grand Renaissance palaces. The grounds, both formal gardens, and the native hammock encircling the entrance are scattered with statuary. Vizcaya encompasses one of the finest collections of decorative arts in America.

The magnificently appointed ten-acre villa features rooms of European decorative arts, representing the Renaissance, baroque, rococo and neoclassic times. Lloyd and I entered another world at Vizcaya, a place from the past, with its fabulous rooms enhanced with decorative features and furnishings that evoke Renaissance Italy.

Vizcaya is located at 3251 South Miami Avenue in the Coconut Grove neighborhood of Miami.