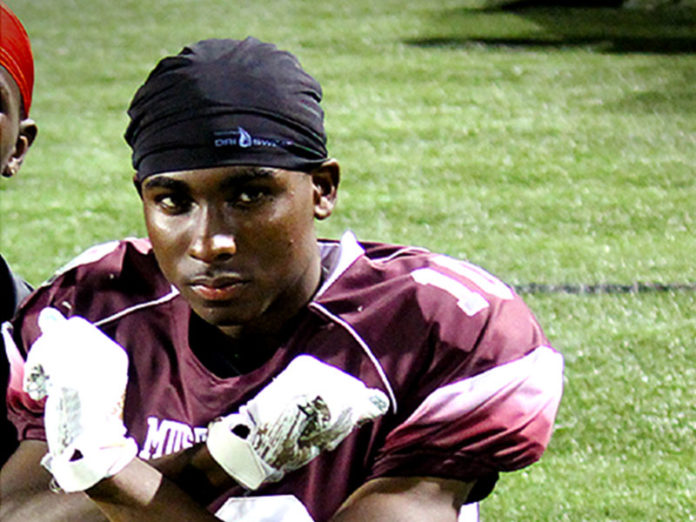 Student Body Section Was “Lit” As The Mustangs Dominated The Rams

It was a long night for Desert Mirage’s defense trying to keep up with West Valley’s skill players. Most of West Valley’s starters didn’t even see the field in the second half and were cheering on their teammates from the sidelines. West Valley scored two touchdowns in the very beginning of the game, one after receiving the ball at kick-off and the other after forcing a turnover (via fumble) and making Desert Mirage pay for the mistake by turning Tyrone Jackson Jr. (#3) loose for a 60 yard run, the game was quickly getting out of hand for the Rams and the Mustangs rushing game looked dominate.

Tyrone Jackson Jr wasn’t the only player who got to see the end zone last Friday night. Alfred Jones scored two times, once through the air and once on the ground. Tyrone Jackson Jr banked in two rushing touchdowns total and over 100 yards. Their performances made it hard to choose one of them for player of the week, so The Hemet & San Jacinto Chronicle decided that they both would share player of the week honors for this game. However, the Mustangs offense was feeling generous and four other players were able to get into the end zone.

The student body section was screaming, dancing, and cheering their team on all game long. Many of the students came down and congratulated the team on their blowout victory, many of them looked like they were on the field with the team for the last two hours. That’s how hard they were cheering on their fellow Mustangs. The final score of the game was 55-0. The Mustangs put on a dominant showing in all phases of the game and looked like they might be ready to move up to a more competitive division like they were in the past.

Coach Perez had this to say to the team after the game, “You guys enjoy this win, it was a big win and this is the first time West Valley has been 2-0 since 2014, however, get it all out of your system tonight because we are back here at 9:00 in the morning for film and Temecula Valley isn’t going to let us run all around the field on them like we did tonight, so we have to start preparing immediately. You understand? Celebrate until 9:00 tomorrow morning, and I want you guys in the film room ready to start preparing for next week.”

Coach Perez want them to enjoy their victory, but wanted them to understand that they need to start looking at next week’s matchup, Temecula Valley has an excellent program and is coming off a victory against Elsinore High. A matchup against them will help West Valley see what they need to tighten up before league games against Beaumont, Hemet, San Jacinto, and Citrus Hills. As of right now, the league play looks like it’s going to be tight.

In other Mountain Pass League Games; Tahquitz edged out Indo 14-13, Hemet recorded their first win of the year against Vista Del Lago 35-21, San Jacinto fell to Woodrow High School 27-13, Beaumont was impressive in their week two victory over pacific 56-14, and Citrus Hill won their first game of the season 27-19 against Palm Springs. Pictures of the game will be available on my personal Facebook page @AuthorKyleRaeHeadlee

Kyle Headlee - September 20, 2019
The Eastlake Titans made the trip from Chula Vista last Friday night. They entered Tiger Stadium with a 0-3 record and felt determined to not go home with a 0-4 record.

Kyle Headlee - November 7, 2019
The girls in the Mountain Pass League put on quite an exhibition this year. Unfortunately everyone's season has come to an end in the CIF