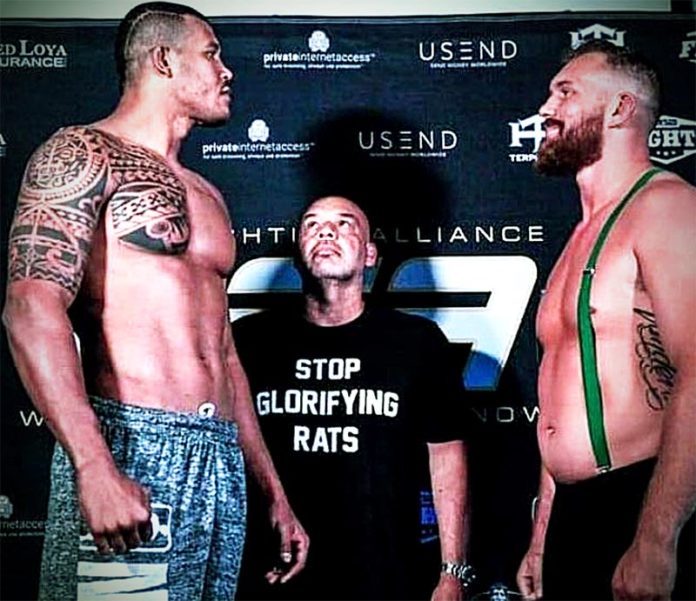 A Tough Match For Our Hometown Heavyweight Champ

Jared Vanderaa took on Renan Ferreria at the Riverside Municipal Auditorium last Friday night. Legacy Fighting Alliance put on the fight; it was a heavyweight bout that was important to both men. Jared Vanderaa is currently the Heavyweight Champion in South Africa for EFC, Renan Ferreria is a fighter from Brazil training underneath legendary Brazilian fighters “Big Nog” & “Little Nog” it was heavily suggested before this fight that the winner would get an opportunity to challenge for the LFA Heavyweight Belt or might even get that call that most MMA fighters dream of from Dana White at the UFC.

In the first round, both fighters looked excited and ready to fight; they met in the center of the cage and started trading hard punches and leg kicks. There were a few scrambles and grappling exchanges, but the majority of the first round consisted of great striking exchanges. Jared Vanderaa weighed in at 264 and is listed as 6’5″ he is certainly a huge man, but his opponent Renan is listed as 6’10” and weighed in at 248 pounds. Renan definitely looked like the bigger man, but that doesn’t always mean better, Jared looked great in the grappling transitions and to me appeared to be stronger and got the better of those exchanges.

In the second round, Renan landed a great right straight that came right down the pipe. Renan’s arms are so long that it looked like Jared miscalculated the distance and let the punch clip him. Vanderaa is usually great at slipping shots like that. The punch put Jared on the mat, but didn’t really hurt him. He appeared to be composed and defended Renan’s barrage of punches from the top. Renan landed a couple of huge elbows that split Jared’s forehead and opened him up, Vanderaa fought his way up to a standing position. The fighters were now both on their feet. Vanderaa executed a beautiful trip and took Renan to the ground. Vanderaa was controlling this position until it looked like he took a deep breath in and threw a punch straight down, at that moment Renan started to position himself to finish the fight, seconds later Jared Vanderaa was caught in a deep triangle choke and tapped out.

Renan Ferreria will have his eyes set on the LFA Heavyweight Championship since currently, the title is vacant. His next bout will probably be in early 2020 and for the belt or in the UFC as a rookie with that organization.

Jared Vanderaa will have to wait for the California Commission to make a decision about a medical suspension since Vanderaa took some huge shots. Vanderaa will be looking at Dana White’s Contender Series for his next fight in order to regain traction on the road to the UFC. Maybe there is a title defense in his future. Either way, we expect Jared Vanderaa to bounce back stronger than ever and keep representing Hemet & San Jacinto in the cage.

The Hemet & San Jacinto would like to congratulate Jared Vanderaa on an amazing fight and can’t wait for his next match! We wish you a speedy recovery Champ!