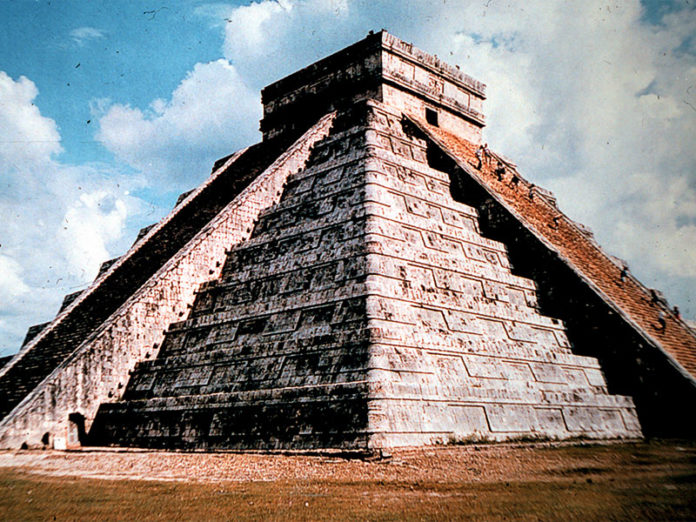 On one of our trips to Cancun, off the northeast tip of the Yucatan Peninsula, my husband Lloyd and I toured Chichen Itza, about 120 miles to the west. One of the best-known and grandest of the Mayan ruins, we found it to be a remarkable sight, towering above trees in the middle of the jungle.

The Mayan history started around the year 1500 BC in the Guatemalan highlands. By 200 AD, the Mayas were erecting pyramids and temples in the Yucatan, and by the 10th century, they were more advanced than any others. All Mexico’s archeological sites are national parks, run by the government.

There are about 4,000 ruins spread throughout the Yucatan, approximately 400,000 architectural locations, this “Land of the Mayas” being a favored area of archaeologists and historians. We have visited many of these, and some are having widespread excavations. Some temples preceded Columbus’s arrival by eight centuries.

According to archeologists’ theories, the huge, great Mayan city of Chichen Itza was founded about 435 to 455 AD, inhabited until 1204 AD, abandoned, then reoccupied around 700 AD by descendants of the original settlers. During 975 to 1200 AD, the Maya world was invaded by the Toltecs from central Mexico. The Pyramid of Quetzalcoatl, near Mexico City, may even have had its origins in Chichen Itza.

Chichen Itza, has been named a World Heritage site, and is one of the archaeological spectacles of the world.  There are two general sections. New Chichen is enormous and takes days to fully explore the many buildings. Old Chichen, about half-a-mile beyond the ruins, has mostly Mayan ruins, with ancient buildings overgrown by flowering vines.

The most impressive edifice is the Castle, on the Great Plaza, a nine-level pyramid, about 75 feet high. Each side of its square base is about 180 feet wide at the base, with a temple at the top. Jam-packed with symbolism, the Castle has four stairways facing the cardinal directions, and 365 steps, signifying each day of the year. On the sides are 52 panels, representing the 52 years of the Maya calendar, and 18 terraces representing the 18 months of the religious year. The Castle is a second pyramid that was built upon a smaller previous pyramid, and was created in precise harmony with astrological theories, such as one story for each of the 9 heavens, 91 stairs on each staircase, giving a total of 364, in addition to one summit platform.

We enjoyed watching tourists carefully climbing a steep stairway to the summit, with the help of a rusted chain, running down the step’s mid-section. These stairways, built in an oblique and undulating serpentine arrangement, are not meant to be climbed straight. The view from the top is worth the effort, as nearly all other structures can be seen from there. Getting up the steps is not as challenging, as it is when trying to get down them. A big rattlesnake head (the rattlesnake being the main religious symbol of the Mayans) with open jaws, is on the sides of each stairway. It is believed that the rattler adds one rattle to its tail yearly.

At the spring and fall equinoxes, the setting sun brings forth the shadowy form of a serpent along the Castle’s side. Thousands of people come to Chichen Itza to see this spectacle.

We saw 14 stone sculptures of the rain god Chac Mool, a monolithic statue representing a priest or deity half-seated and half-reclining. Chac Mool was baptized by a 19th century Frenchman and was used for receiving the hearts of sacrificed victims.

On top of the stairway, between two massive stone snakes, reclines the stone figure of Chac Mool. A Chac Mool ceremonial figure guards an entrance to the Temple of the Warriors, also known as the Group of the Thousand Columns (previously a marketplace), a complex of terraces.  The walls have Mayan carvings, the Toltec warriors and death symbols.  The Temple of the Wall Panels and the Nunnery have exquisitely carved facades. A massive structure 300 feet long and 55 feet high, it has connecting rooms.

One of Mexico’s contributions to the Old World was team sports and rubber balls. We saw the huge Ball Court, about 272 feet long, believed to be the largest ancient playing field in the Americas. The Mayas and Toltecs participated in what must have been the first game with a rubber ball.  Played like soccer, hands were not allowed to be used, and the rubber ball could only be hit with the forearms, knees, and hips. The purpose was to get the ball through a stone ring, not much bigger than the ball, approximately 20 feet high on the stone wall.

These competitions seem lacking in compassion, as opponents in this religious ritual, a life-or-death match for the captains, is quite difficult.  Embellished with beautifully carved friezes, rituals of sacrifice are reconstructed in bas relief figures. The acoustics are so spectacular that someone at one end of the court can distinctively hear the whispers of another person at the other end.

In the south sector, the earliest date discovered in the city (around 879 AD) was found in Old Chichen. We went to see El Caracol, a famous and sophisticated Maya astronomical observatory. The ancient Mayas and their culture are known for their abilities in mathematics, astronomy and communication.

The word “caracol” is Spanish for “snail,” signifying the staircase within the structure, which circles like the inside of a snail. Small openings in the staircase wall give fixes on important celestial bodies, and openings in the dome-like upper edifice’s walls line up with certain stars at positive dates, so priests could know when to plant and harvest, be warned of eclipses, what gods need propagating (sacrifices), and how to adjust the calendar.

El Caracol was built in various stages, with additions of skull-shape incense burners from the Toltecs. Visually superb, and a scientific wonder, this Observatory is a circular dome above an enormous terraced temple. The domed structure is Toltec, dates from the 10th century, and was one of the last Mayan buildings built. The Snail, cylindrical in shape, as well as the Nunnery and Temple of the Wall Panels, were erected between 800 and 900 BC. These edifices are pure Maya in style, although the structures on the north side of the highway show the Toltec impact.

We learned that there are 40,000 sinkholes (cenotes) in the Yucatan, and the Sacred Well of Chichen Itza is one of the biggest of these natural wells. Maidens, men, women, and children were drugged in the early morning, then hurled into the well (enclosed by perpendicular cliffs 65 feet high), to appease the rain god Chac. The slippery walls were impossible to climb, and most could not swim good enough to survive until noon, when those who survived were pulled out to tell what they learned from the water spirits.

Sacrifices both of people and objects were made at the cenote, but tales of maidens being thrown in are overstated.   The Mayans felt that those individuals that were offered as a sacrifice never actually died, but that they went to live with the gods.

Two cenotes, or limestone sinkholes, served Chichen Itza. One was just a well that provided water, and the other was the Sacred Cenote. In 1885, Edward Thompson, the Yucatan American Consul, purchased the area for $75, and took years exploring the cenote’s watery depths. He found jade, bone, shell, copper, and gold, brought mostly from distant areas, suggesting that pilgrims came to Chichen Itza from Maya communities throughout what we now know as Latin America, to make donations to the Maya gods.

Trees and shrubs have since washed into the well, keeping divers from getting to the bottom, and the pool is fed by a network of underground rivers, so it cannot be drained. Thompson illegally dispatched his discoveries to the Peabody Museum in diplomatic pouches, generating a legal problem, which diminished a little when some of his hoard was returned to Mexico.

An in-depth legal exploration of the well was undertaken by the National Geographic Society in the early 1960’s. Excavations, sucking mud from under nine meters of murky water, have exposed the remains of sacrificial victims, bones, idols, jewelry, jade, silver, gold, and other Mayan artifacts.

The Yucatan is also famous for chicle, the thick, milky juice that comes from the zapote trees, which is used to make chewing gum. In the early 20th century, the desire for chewing gum was sustained by chicle, a gum made from a tree that grows throughout the Yucatan. Therefore, it was the machete-carrying men in pursuit for more trees, not the archeologists, that started the discoveries of the outstanding and marvelous, jungle-covered Mayan ruins.

Lloyd and I find the Yucatan Peninsula to be a land apart from the rest of Mexico, a country within a country. It is one of the most captivating and redolent provinces of Mexico, with vast spreads of green jungle, thatched huts, crumbling ruins, and various beaches.

Search: CHICHEN ITZA, IN THE YUCATAN 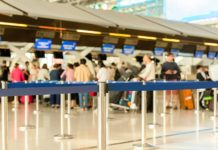 Associated Press - January 26, 2021
Carnival Cruise Line is canceling and delaying more U.S. trips at a time when new cases of COVID-19 are averaging about 170,000 per day in the country amid a jumbled rollout of vaccines.