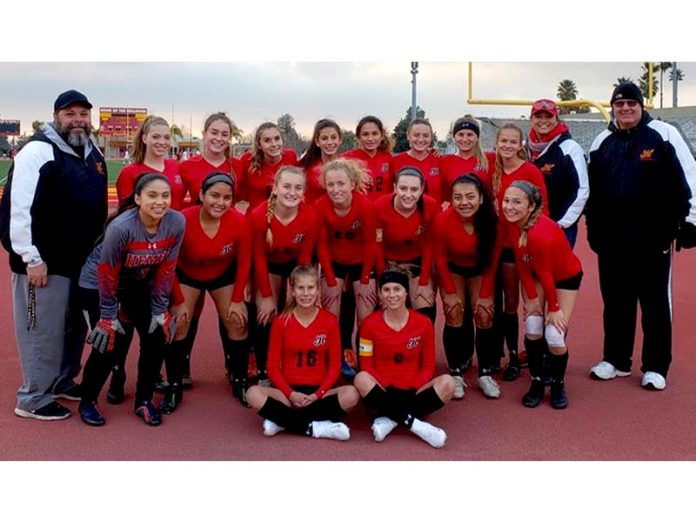 Can They Go All The Way?

The Lady Bulldogs have been on a roll this season, and it doesn’t seem like they are ready to call it quits any time soon. The girls have earned an impressive record this season, 20 with only three losses and two ties. The girls appear to be miles ahead of their competition. The roster is made of a healthy mixture of upper and lower classmen. Which means there is a bright future for the Bulldogs on the soccer field. This team has been built with high power scoring and tenacious defense in mind. They have scored 91 goals on the year. While only allowing 17. The Bulldogs are currently on a 9-game winning streak.

The Hemet High Bulldogs didn’t just win the Mountain Pass League; they are also the number one ranked team in Division 4. No other team has scored more goals than them. However, Bloomington High School’s defense has been elite this season, only allowing eight goals on the year. Maxpreps.com has the Bulldogs listed as their favorites to win the CIF championship this year, and it looks like they could do it. Hemet has a tough game coming up against Torrance High School, they are ranked 149th in the state and have outscored their opponents 52-20 on the year. On paper, the Bulldogs should beat them; they are ranked in the top 100 (100) in the state.

The biggest threats to the bulldogs are Bloomington and Sierra Canyon. Luckily for the Bulldog’s, those two giants may have to face each other in order to make it to the championship round in the tournament. Sierra Canyon is ranked 101 in the state and has a 2-1 goal ratio on the season. Bloomington is ranked 118 in the state. The game between these two should be exciting, and the Bulldogs will have their eyes on them.

All of these girls would love to bring a CIF championship home to Hemet. Often times, sports like Soccer, Volleyball, and Softball get overlooked by Football & Basketball. Football & Basketball get all of the love and attention of the student body, boosters, and Athletic Director. These girls are on a mission to prove that they deserve the recognition.

It has been impressive what Coach Steve Strutz has been about to get done this year. Last year Hemet made it to the Semi-Finals of the CIF playoffs. It’s not often that teams are able to repeat success, but it’s arguable that this team is even better than last year. It’s scary to think that some of their best players are only freshmen. Division 4 better watch out, because these girls are here to stay and looking to make history.

Kyle Headlee - September 26, 2019
This was it, the final game before it really starts to matter. Temecula Valley came into San Jacinto last Thursday to play the Tigers. This was the last game before Senior Receiver Antoine Sullivan transfer suspension is over, which should help San Jacinto's offense dramatically.

This Historic Rivalry Comes To An End… Again

Kyle Headlee - October 24, 2019
A tradition that has taken place in our two towns as long as anyone can remember. The Battle of the Bell, where Hemet High takes on San Jacinto High in a cross town rivalry game.