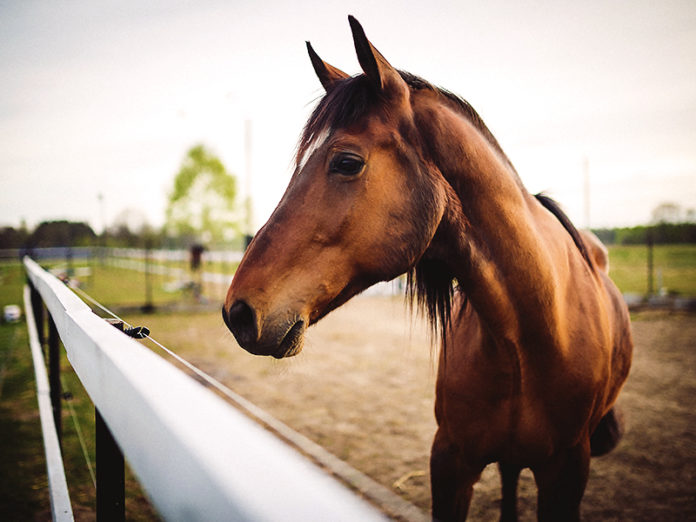 It has long been known that animals can give comfort to lonely or solitary folks. A pet dog can calm the nerves and serve as a companion to an anxious person. Right here in Hemet T.H.E. Friends have used horses to assist with the treatment of disabled children.

However, a man with a vision has recently acquired a ten-acre ranch in the far western part of Hemet, just beyond Diamond Valley Lake and is about to make a significant contribution to this Valley when it comes to returning veterans suffering from PTSD. He knows what to do because he’s been there and done that. His name is Robert Martin. Let us tell you all about him.

He is from Northern California, graduated from high school in 1982. From a class of 435, he was the only one to go into the service. He explains.
“I enlisted in the U. S. Army reserves at 17, and after basic training, I tried to transfer to active duty, but the reserves wouldn’t release me. After six years, I finally was assigned to active duty in 1988.”

In 1996s, after suffering the loss of his left arm in Iraqi combat, he received a medical discharge. “I rehabbed myself and after the 9/11 terrorist attack, I re-enlisted and served another 14 years full time with two overseas appointments in Iraq, where I saw things that no human being ought to see or be a part of.”

After his discharge, he tried to find peace and solitude, but his PTSD overcame him. “I was way oversubscribed opioids for ten years. Nothing seemed to help. Memories and flashbacks pursued me. My kids were grown, and I found myself alone in a big house in the winter. Loneliness created a terrible depression. I finally ended in the V. A. Psych ward in Minnesota. I became so complacent and falling apart physically and mentally that I was suicidal.”

To find his way back to a semblance of sanity, he decided to move back to California to play golf with his father.
“I didn’t need to worry about financial security because I had my full retirement with all the amenities that go with it.”
It was not an easy path to tread. After six months back in California, he developed skin cancer. He moved to Banning, California where he could be close to a V. A. Hospital where he was able to get proper treatment.

“I was living all by myself in a half-house, so small we called it a cube rather than a residence.”
As a child, he lived on a farm with horses and remembered how much enjoyment that brought him.
“I was thinking that maybe being around horses again might help me with my PTSD, so I sought out a place where I could take up riding lessons.”

He found that place on a ranch in San Jacinto where he met his girlfriend Chris Vernier and business partner, plus four or five dogs. “I fit in on the ranch because I knew how to fix things.” His stay there was brief because the owner decided to sell the property “Chris and I moved on to another temporary location. For a while, they seemed like vagabonds, but he never lost his dream of getting well and helping others. The horses had changed his perspective about life and soothed his ragged nerves.

“We came into good luck when we leased a ten-acre horse ranch in Hemet. The owner of the ranch, a Marine veteran from the Vietnam War, believed in me and allowed us to buy the place on a contract dead.”
The main house on the ranch is 3200 square feet, consisting of 3 bedrooms, a large yard, and a pool. The property is a fully functioning horse ranch.

Robert says, “We’ll build a yurt on the lower end of the ranch and turn the big house into transitional housing for discharged veterans with PTSD coming off active duty, four to six men to spend up to six months here, depending upon the situation. It is not going to be a rehab facility. We intend it to offer a transitional period from discharge to becoming adjusted back into civilian life. Some will have mental health problems and others with emotional situations as a result of combat.

“Many will need to learn how to live again, budgeting money and nutrition, and reentry into civilian life. They will not leave here without some assistance toward the future, offering therapy as needed.”

He believes that horses have helped him on his way into the future. “I haven’t had a nightmare in six months, and I want to introduce that same peace of mind to others because I know it works.”
He is up every morning at five, gets on his horse for a couple of hours, “just to get my head straight and start the day.”

Some of the services offered are:

3. Life Skills Training such as money management, coping skills, job interview skills, nutrition/cooking, and managing daily life as a civilian. Many of the life skills will be taught using equines.

“Services for Veterans, Active Duty and First Responders with PTSD,” he says, “not residing at the facility include Equine Therapy and Trauma-Focused Therapy. Additionally, future services are in the planning stages and include adaptive horseback riding for amputees and other physically .disabled persons and overnight camping with horses in conjunction with life skills training as well as rehabilitating injured or traumatized horses. With the assistance of our certified Veterinarian Technician Veterans will learn skills to help rehab the horse they are assigned to and will reap the benefits of helping to heal with another.”

He explained that horses are prey animals and have a very large portion of their brains that operate out of intuition and emotion to detect danger and make the decision to act on ‘fight or flight’ out of instinct. They are highly emotionally intelligent creatures and recognize the slightest gesture, body posture, tone of voice, and facial extensions.

Horses rely on these skills to keep themselves safe. They are so skilled with these abilities that they are often aware of emotions that we may be experiencing out of consciousness. Another reason horses are such skilled therapists is that they don’t use language and many trauma feelings; often because they can’t identify them. Horses use a mirroring technique that can help a person ‘see” how they are acting and feeling. Moreover, many traumatized persons are tired of talking and telling their story when traditional has failed them. Brain injured people may have difficulty with speech all growth.

Science has shown that the mere interaction with horses can alter brain chemistry, reducing, and even eliminating the symptoms of PTSD. Horses are also nonjudgmental and have no preconceived notions or expectations. The goal of Equine Therapy is that with the guidance of an Equine Therapist and/or a Life Skills Coach persons will learn to identify their tendencies to engage in self-defeating or negative thoughts and actions and with the help of a horse learn more positive and fulfilling ways of expressing themselves and dealing with the world.

R.M. Veterans Unity Ranch is a nonprofit organization and will welcome grants and contributions. The ranch is located at 30920 S. Palm Avenue, in Hemet. Operations are conducted by Rob Martin, and he can be reached at (760) 408-2902.