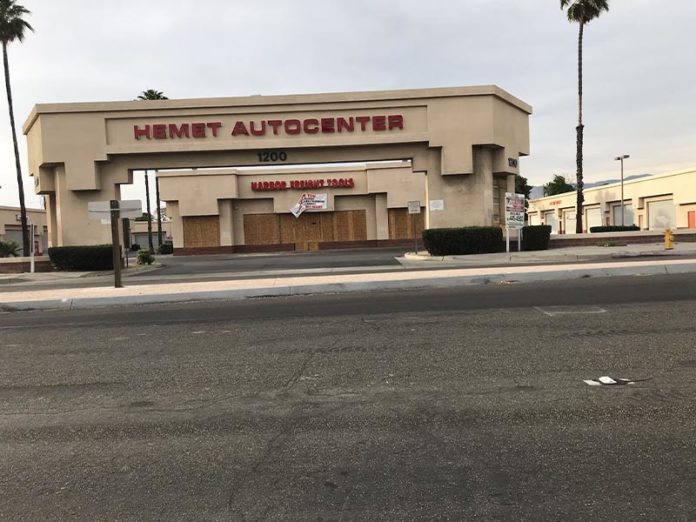 Like so many small towns, the local community developed an attitude that “it can’t happen here.” Ah, but it did. By the weekend, all hell broke loose at the Hemet Valley Mall when peaceful demonstrators were exercising their first amendment rights. Like leeches riding in piggyback, looters and trouble-makers crashed the glass doors of the mall and squeezed in through the accordion gates to do their evil. Fortunately, most of the tenants, anticipating such an event, locked their valuables away in safes.

By Monday afternoon, the city had ordered a 6 p.m. to 6 a.m. curfew and from then until dusk plywood by the thousands of sheets obscured store and business windows on Florida Avenue on the West side of town to New Chicago Avenue on the Eastside. This reporter spent several hours, along with journalists and cameramen, canvassing Florida Avenue from end to end for several hours. The men in blue were out in abundance, politely securing the city, which seemed to have suddenly dropped dead from dusk on. They are to be congratulated. On Tuesday, the city continued its curfew but only for people on the streets. Evening businesses remained open. Those coming and going were exempt, but loafers were subject to citation, arrest or both. Although there may be a slightly soiled apple in the bunch, our PD is basically an honest group of hard-working guys and gals dedicated to serving the city they love. (More about copes later).

That statement cost Marie Antoinette her head and brought on the French Revolution. I grew up in the south and I can tell you from personal knowledge that poor Whites often picked cotton side by side with Blacks. Unfortunately, everything about our country economically is based on the haves and have nots. Politicians and civil leaders promise to investigate when the two clash. They make promises and promise answers. What the have-nots want is solutions, not investigations and answers that disappear as soon as all is quiet out on the western front. That simply isn’t cutting it. Harry Truman said that “The only thing we don’t know is the lessons of history we fail to learn.” History repeats itself unless we make deep down changes, not just surface ripples.

HELP ME, I CAN’T BREATHE

Our latest uprising came about as a Black man in the North City of Minneapolis lay dying withe knee of a totally corrupt cop firmly implanted in this throat who, after more than 8 minutes, gave up the ghost and called out “Mama,” as life left his body. If that doesn’t grab you by the heart, you are made of metal. What’s worse, police brutality (rarely ever against the money-class) exists in our society and grows. One of the major problems that we seem never to understand is why the good cops don’t report these monsters that get off by being sadistic. How good is a good guy if he defends a bad egg when he knows he is a bad egg. That long blue line forms a barrier against arrest and prosecution of their own. Therein comes money. I am a strong believer in unions and have been a member of one for most of my adult life; however, when a labor union becomes so strong they can flout the laws of the land, then it is time to look into what kind labor leaders we have. Good, honest cops who shield their crooked buddies should hang their heads in shame.

The most popular slogan today is, “Black Lives Matter.” Wrong! “ALL LIVES MATTER.” The color of your skin merely hides the same color on the inside of everybody’s skin. I watched intently for hours over the week end as stores were looted and destroyed from coast to coast. Black, white, brown or green folks need to control their own communities. Whether you like it or not most all of the looters, black or white, were young. It is sad to see the protestor being ignored as they beg the looters to stop. The balance of Whites who think it is smart to destroy the property of others are the first to point fingers. Always it is the guy without a good defense lawyer. Seems to minorities that the only time they are noticed is when they burn and loot the rich, however they seem not to know they are killing off mom and pop and sole ownership businesses. Your mama should have taught you better.

Flag-waving hypocrites scream and warn to beware of a socialist government. They don’t seem to be aware that American socialism is not Soviet Socialism. We are in no danger of becoming that kind of government unless we self-implode. We’re a Socio-Capitalistic Republic and have been for decades. We enjoy more socialist programs and privileges than any other free country in the world. Social Security, Medicare, Medical, Veteran’s pensions, minimum wage, single mothers with kids etc., etc., and we cling to them like they are our birthright as we should. Just don’t know the hand that is feeding you.

I’ve spoken to several CPA’s and economist oriented folks and have to my own conclusion (not just my own though) that we might have the solution right under our snobby noses. So many of us look down our noses at folks without status., i.e., inequality. Social Security was designed as a supplement, not a be-all (which it has become for a lot of people. We spend billions of dollars, maybe even trillions, in foreign aid and rebuilding our infrastructure when these events occur. Based on a living wage, couldn’t the government just as well spend some of that money on supplements to people who simply cannot manage on minimum wage as it stands today? A reporter hears a lot of wild things, but sometimes something rings a bell and they start talking about literary awards. Well, good for them. But some things make more sense than others.

To solve any problem, whether physical, mental or financial, our leaders from City Council to the Presidency need to roll up their sleeves and go to work. Opportunity abounds if we are willing to get together and take one step at a time. My grandmother once told me that, “Most people don’t recognize opportunity when they open the door because it comes in overalls ready to work.”

UNITED WE STAND, DIVIDED WE FALL

Mr. Lincoln was quite a profit. This country split right down the middle during the Vietnam War and has never recovered. Political parties need to stop hating and trashing each other. When Ronald Reagan was President, he and Tip O’Neil, speaker of the house (one a Republican, the other a Democrat) left politics at the door after work, had a drink together and enjoyed their planning a compromise. They understand that nobody gets the whole pie at once. It is always once slice at a time. They knew they had to think for the country, not just themselves. We’ve lost our rudder and if we don’t start thinking of us all as one country with one purpose, we are never going to have any lasting solutions and peace on the home front. As long as the haves continue to take the have-nots seriously, we will have continuous internal turmoil. The plumber is more important to your well being than a movie star and don’t forget it. Just because he doesn’t have a mansion or drive an expensive roadster doesn’t make him unequal. We are all equals. Some get paid more for what we do than others, but that doesn’t make us superior. We can do without the fancy steak and champagne dinners, but not the garbage collector. The President of the United States and the guy who cleans the sewers are equally important – sometimes the sewer guy seems more so. I’m sure I’ve offended someone. Hope so. In this business, if you don’t dodge the slings and arrows, you don’t last long. Just sayin’