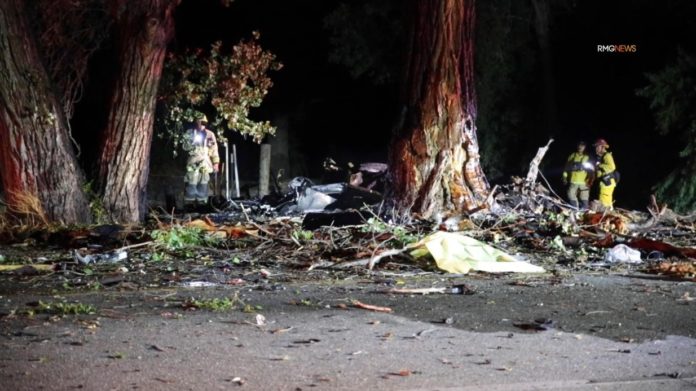 The accident, which happened on State St., just south of Soboba Rd. and north of Record St., caused the victim to be ejected from his vehicle; which exploded and burst into flames upon impact. The car fire then ignited a vegetation fire. It was not immediately known if the victim was wearing a seat-belt at the time of the crash, according to CHP.

Witnesses from as far as several blocks away later reported seeing the vehicle traveling at over 100 mph just moments before hearing a loud boom followed by an explosion.

CHP, along with Riverside County Sheriff’s and Cal Fire/Riverside County Fire departments and other emergency personnel were dispatched to the scene just after 1 a.m., after receiving reports of a vehicle that had smashed into a tree and burst into flames, CHP Sgt. Brian King later reported from the scene.

Deputies arrived within minutes of the dispatched call and confirmed finding a vehicle fully engulfed in flames and updated that the car fire had begun to spread to nearby vegetation.

More than two dozen Cal Fire and Soboba firefighters and paramedics soon arrived at the scene and spent about thirty minutes knocking down the vegetation blaze ignited by the vehicle fire. The impact left the car, which was later described as a 2018 Dodge Charger, destroyed and completely unrecognizable.

The driver and sole-occupant of the vehicle, who was identified Michael Anthony Vega, 46, of San Jacinto, suffered major traumatic injuries when he was ejected from his car and was pronounced deceased at the scene at 1:10 a.m.

During their subsequent investigation, CHP officers determined the driver of the Dodge had been traveling northbound on State St. at a high rate of speed, when “for reasons still under investigation the vehicle went off the roadway and collided into a tree,” King reported.

The tremendous, high-speed collision left vehicle parts and debris scattered across more than 100 yards of the roadway, leaving it blocked and impassable.

As their investigation continued, CHP located and interviewed at least one witness who told them they were ordering food at a Del Taco in the area of State St. and Ramona Expressway when they saw the victim’s vehicle race by.

The witness “put the vehicle at over 100 mph”, according to Sgt.

While officials worked at the scene and cleaned up extensive debris left by the crash they called for the temporary closure of State St. The road remain closed for several hours, and was reopened around 4 a.m.

Alcohol and/or drug intoxication have not been ruled out as contributing factors in the fiery wreck and CHP’s investigation into the deadly crash is ongoing.

Chihuahua puppy miraculously survives after being shot with an arrow in...

Contributed - May 29, 2022
A Chihuahua puppy miraculously survived after she was shot in the neck by an arrow in California. According to the Riverside County Department of Animal Services, a woman called 911 to report that she heard a dog screaming in pain and it woke her up. When a deputy from the Riverside County Sheriff’s Office got on the scene, they picked up the dog and an officer with animal services recovered her from the deputy’s patrol car.