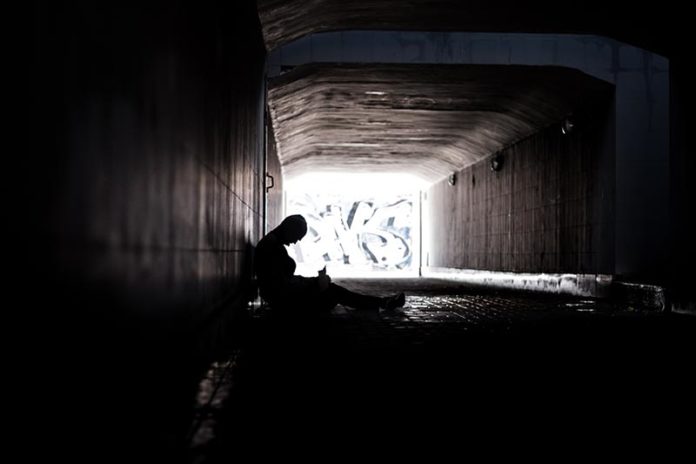 (Takin’ it to the streets)

Our senior writer delves deep into the homeless situation of Hemet

Growing up “dirt poor” in the mountain communities of West Virginia during the Great Depression, “homeless” usually meant that one had no family. I was a product of “Appalachia” 30 years before John F. Kennedy discovered it. Homeless in those early days meant little children without parents. Often a mother had died and the state, secure in it’s infinite wisdom that no man was capable of raising a family on his own, swept the children off to orphanages where they were ogled, fondled and examined by potential adoptive parents who treated them as though they were animals with bad teeth.

Homeless adults were “aunts” and “uncles” and “grandmas,” who were made room for in the homes of the more fortunate. They were rarely related to their benefactors. Hoboes riding the rails became role models to a young boy dreaming of adventure where daring young men who “drank coffee from an old tin can.” Folks with little of their own other than a roof over their heads, managed to find room for one more. We took care of our poor. They did not sleep in the streets.

As a society we have grown greedy, fat, self-indulgent and non-caring except during the Christmas holidays when the cameras are rolling, with praise being heaped on those who suddenly discover the homeless. Christmas becomes a celebration of atonement for most of us. Christmas comes but once a year. So the question arises, who are the homeless and who offers a helping hand the rest of the year?

It has been stated by someone far more literate than yours truly, that travel is the best educator, so I took to the streets to investigate our homeless situation: a large light of understanding came about. I discovered a city within a city: a population of lives often beyond hope. Let me share some of my discoveries with you.

Names, of course, have been changed to protect the dignity and identities of victims of a society that often cares too little for those in need.

Virginia and Paul arrived in Hemet after he lost his job at a manufacturing plant near Los Angeles. They had meager savings, but were told that housing and cost of living were half what they were in the big city. “We were ordinary people with four children,” Virginia explained, “who never thought we’d become part of the homeless.” But they did. There was a long waiting line just to be considered for “Section 8” housing. With little less than a thousand dollars, they found a one-bedroom apartment for $350 a month. “With first and last month’s rent we were left with little left to live on.” They managed to obtain emergency food stamps, but little else in the way of financial assistance. Before Paul could find a part-time job, their money ran out and they were evicted from their apartment. “We slept in our van while I searched for work,” said Paul. They continued to huddle in their vehicle. “I finally landed a full-time job at minimum wage, but we still didn’t have the means to find a house. It was the same old story: first and last and references. Getting evicted because you don’t have the rent money is not a valid reference.” A good Samaritan let them park their van on the rear of his property, which gave the family an address. “With an actual mailing address we qualified for AFDC, food stamps and Medi-Cal.” However, when Virginia found work, the County cut off their food stamps. It took them several years before they were able to re-enter society as productive citizens. They managed to make it back from homelessness but it took several years. Most of our homeless are less fortunate.

Matt is 16, a runaway from a mid-west farm community. He calls Weston Park home at night and mooches food and change outside of Starbucks on Florida Avenue. He is sometimes a male prostitute, as is his girl pal, Angie. “I’m not a pro. I don’t do it regularly. We got to eat, so we pool the change people give us.” He puts on a tough front, but talk to him for a while and you find a scared young man from a broken home. “My old man walked out one day and left mom with nothing but four kids and a lot of bills. She moved in with her sister and her family. There just wasn’t room for us all, so I hit the highway and hitch-hiked west. I am not a druggie. I don’t even smoke, but that’s what people think. He does admit to smoking weed once in a while. “Man, the pain gets so bad sometimes that you have to do something to get rid of the depression. I would really like to go back to school. They ain’t interested unless you got a home.” I asked him to explain his “depression.” “When you try to get some legitimate help, all you do is get harassed by the system. Man, you ever been to the welfare department? All they do is drown you in paperwork and ask stupid questions. The minute you say, “sixteen” they call in the Gestapo: police, social workers, shrinks and all that crap. No thanks. I’d rather take my chances on the street.”

There are dozens of situations like Matt’s in the Valley. Did they choose their life-style? I doubt it. From what I’ve been able to garner, the runaways want to get away from a bad home life, bullies, or other types of harassment. Most did not anticipate what life on the streets is like for a homeless teenager.

(Takin’ it to the streets)

I recently spoke to the Superintendent of the Hemet Unified School District and he said there were more than 400 students in the district that were either living out of family vehicles or in the parks. “We do what we can to get them into a facility. It is not an easy task. “ He readily admitted that he had no idea how many were on their own.

I contacted Reverend Jim Hall, former head of Valley Re-Start, for his input. He is now retired, but referred me to several aid agencies. “I don’t see that the situation has changed much in the past few years: if anything, we have more homeless families and individuals on the streets.”

Stacie Olson, with Project Hope II, situated in Hemet, is a very active lady in the business of rendering aid to the displaced population of Hemet, along with other organizations, such as The Path of Life in Riverside, Prince of Peace Church, The San Jacinto Assembly of God, Randy Jones, pastor at the Val Vista Assembly of God and numerous other outreach programs.

“We work together, but even as close-knit as we are, many fall through the cracks and get lost outside the system. I am currently dealing with close to 500 critical cases of homelessness in the Valley. It is sometimes overwhelming.”

Contrary to mistaken rumors, most homeless in the area stay away from Weston Park in the center of Hemet. Stacie said, “It is a cesspool for druggies and gang types who are not homeless, but merely congregate for no real good.” She described a recent event in which a homeless man found himself on the fringes of Weston Park. “A bunch of guys jumped out of their car and beat this man into unconsciousness.” The hoodlums got back into their vehicle and sped off into the night. The unsuspecting homeless man ended up in the hospital. “These guys didn’t have a purpose. They didn’t try to rob him, just beat him to a pulp and left.”

I’ve talked to homeless young men around Starbucks and out on the parking lots around town. Many of them prefer sleeping in cardboard boxes or business doorways, avoiding Weston Park. “Man,” one fellow said, “that is just inviting trouble.” You will find street people, not all of whom are homeless, looking for handouts at the Target parking lot, Hemet Grocery Outlet parking lot, Big Lots parking lot and almost every other spot providing space for mooching.

According to Stacie, “There are quite a few encampments about the valley where fifteen to twenty people gather, away from any business area. They find their best protection is in huddling together away from traffic. Several encampments exist along the San Jacinto River Bed.”

In a recent poll of sixty to seventy homeless people, ninety percent said they would prefer to not be on the streets and would welcome getting back into normal life if such a program existed. Stacie says her organization tries to hook up the homeless with organizations that can assist.

“There is so much need and not enough help: transportation, education, medical, rehabilitation, food and housing.” She firmly declares that drugs and alcohol play a part in the problem, and that, “The druggies and alcoholics are only a small factor in most situations. Those that turn to drugs and drink often do so just numb the pain of being alone and homeless.”

I have personally approached some of our city council persons and asked what, if anything, the City of Hemet is doing to help the homeless. The answers I’ve received are weak and add up to one common statement. “We’re working on it.” One member of our City Council told me, “Just ship them out.” Those are not answers, only statements. As to housing, it seems to me that with all the empty buildings along Florida Avenue at least one could be converted into sleeping quarters by the city in conjunction with owners who are mostly out-of-community or absentee landlords. When I queried about that, I was told that it is “too complicated.”

Seems to be that we are cutting the deck and dealing the cards, but they always seem to come up with the same helpless, homeless faces. To ignore the situation is like saying we have no racism in the community…and we know that that myth has been blown up a chimney stack. As individuals and community organizations struggle to find ways to obtain housing, jobs, mental health and food sources, where is the bureaucracy? Where is the hope? Just sayin’

Search: Takin’ it to the streets

Q + A with Miguel Madrid Jr.

Calvin Porter - November 7, 2019
For most of us, the holiday season is a time for reunions with family and friends in which we express an appreciation for all our blessings

THE HISTORY OF LABOR DAY IS FILLED WITH VIOLENCE AND DEATH

Rusty Strait - August 30, 2019
Labor Day is celebrated in the United States as a time to honor America's labor force. We take long weekends off and enjoy our few hours away from work as though it were something guaranteed under the Constitution.