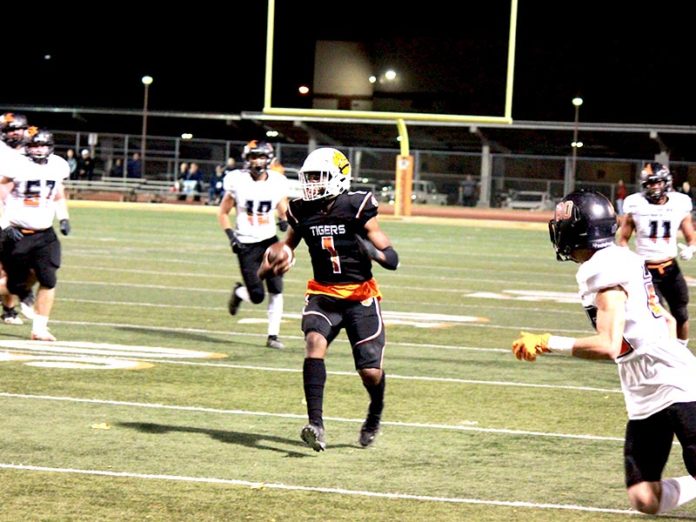 The first round of the CIF playoffs was eventful for our Mountain Pass League teams. Citrus Hill went up against a very tough opponent. Yorba Linda High School was favored to win this game in the matchup and they lived up to expectations. Citrus Hill came into the game knowing that they were the underdogs, but embraced the role and hoped to shock the Valley. Although they had a valiant idea, it never quite translated to the field. In the first quarter of the game both defenses were adamant that they wanted to be the bullies. Neither offense was able to get into the endzone, but Yorba Linda started to figure things out. They put up a touchdown in both the second and third quarter then put the nail in the coffin with two more touchdowns in the fourth. Yorba Linda would go on to win the game 28-0 finishing off Citrus Hill’s season. 7-4 was not what the team was hoping for this season, but it was Coach McMains first season as Citrus Hill’s head coach and there is always a learning curve when a new regime steps in. They will look to come back next season and re-assert themselves as the top dogs in the league.

Beaumont came into the playoffs as the number one seed in the playoffs. A lot of people had them as their pick to be in the championship game. Linfield Christian wasn’t having any of that. They came in to this game ready to make a statement and put the rest of the division on notice. Beaumont jumped out to an early lead, but could never quite finish Linfield off. The game really lacked defense from both teams. Both offenses took turns scoring the football back and forth. However the game wasn’t without controversy: Beaumont had a touchdown called back on them due to a referees “accidental whistle” giving Linfield a chance to catch up. Lindfield’s running back and Hemet native Justin Manqueros carried his team on his back, running for 194 yards with three touchdowns. The final score was 47-42. Linfield Christian will be moving on to the next round and Beaumont’s season is now over.

Hemet traveled to El Monte to take on Arroyo High School. On paper this looked like Hemet’s game to lose, but in the first quarter it appeared that the matchup was closer than it appeared on paper. Both teams struggled to get anything going, especially Hemet.  Their kicker struggled to find his mark early. This field goal kicker (Lance Macintosh) served as Asaiah Aguilar’s replacement since Aguilar was injured mid-way through the season. Lance missed a few field goals throughout the game and coach Gregovich decided to go back to Asaiah Aguilar who entered the game and handed business. The slow start wouldn’t haunt Hemet: they would go on to win the game 48-20 led by Jeremiah Graves’ 226 passing yards, 4 passing touchdowns, 130 rushing yards and 1 rushing touchdown. Hemet’s wide receiver and HSJC All-Valley receiver Ethan Leonard caught three of those touchdowns. Hemet is moving on to the second round.

San Jacinto welcomed Apple Valley to The Jungle.  This game looked like it was going to be a tough one from the first kick-off. Both teams’ defenses were holding their own and limiting the yards the other team was able to put down. Apple Valley struck first while establishing their run game, running it right between the Center and Guards over and over again. It didn’t take long for San Jacinto to figure out Apple Valley’s game plan and make adjustments. Both teams scored in the first quarter, and went into halftime tied 7-7. Kameron Rocha & Antoine Sullivan each intercepted the ball and Apple Valley abandoned the pass game because of it. Kajiya Hollawayne and the rest of the offense began to shine after the half by scoring 21 points. The defense still struggled to contain the run. Apple Valley scored 14 more points, but didn’t quite have enough to get the job done. San Jacinto won this game 21-28 and advances to the next round of the playoffs.