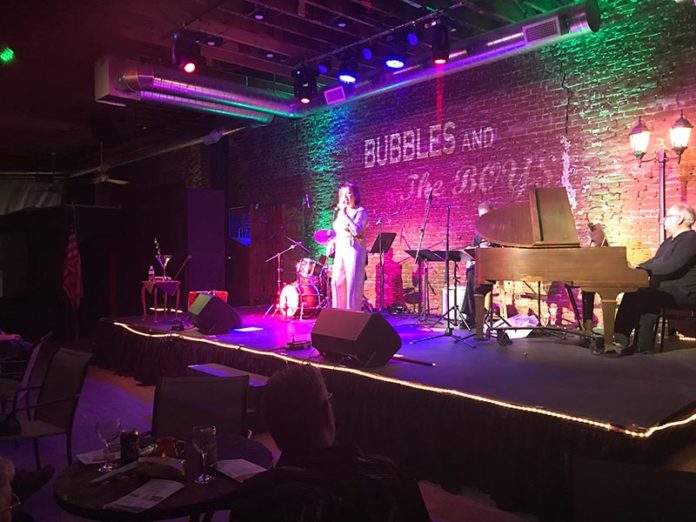 If you like swing, Broadway, jazz or opera but didn’t attend “Bubbles and The Boys” this past Saturday night at the Diamond Valley Arts Council in Hemet, then you cheated yourself out of the best show I’ve seen in the valley in years. Joanne Juliet Lapointe gave a performance beyond human imagination with a voice that zoomed from gut belly flapper to Metropolitan opera in range. She is a blues, flapper, soul and operatic diva with a catalog from Speakeasy to Grand Opera.

She opened her show with a Betty Hutton “Stuff Like That There,” on to an old Broadway flapper’s day version of “I Don’t Care,” a lonely barroom version of “One For My Baby,” and on and on through Edith Piaf’s, “La Vien Rose and an aria from Puccini that sent the audience to its feet with the first of several standing ovations.

I tell you folks; you ain’t seen nothing like her in the San Jacinto Valley in my memory, and that goes back 35 years.

Following a short intermission, she came roaring back and made plenty of use of her three accompanists: Lou Usevic on Bass, Rob Woyshner at the piano and Quintin Dennard, late of Detroit’s Motown and beyond on Drums, and LaPointe sported quite a set of pipes. She was not the least bit piggish about the spotlight, always willing to share with the guys who tried to make her look better, which was a wasted effort because she would shine in the middle of a desert with nothing but camels for an audience.

She gets the nickname “Bubbles” from the way she emulates the great Opera Diva, Beverly Sills, and she does so in so many ways. She has been referred by media reviewers as “Beverly Sills meets Bette Midler. Her one-woman show, “Red Hot Bubbles,” a tribute to Carol Burnett, Madeline Kahn and Bette Midler has been delighting audiences throughout the Southland for years.

As for operatic credits, she has spent seasons with the San Diego and Long Beach Opera Companies.

As an addendum, Rob Woyshner gave the most beautiful rendition of DeBussey’s, “Claire de Lune” as a redux to a series of “La Luna” songs beginning with Andy Williams Moon River. There were eyes filled with tears of sweet memories among the adoring audience that just couldn’t get enough of Woyshner or LaPointe.

And plaudits to Jason Strain: the guy is always up in the control box with more light spectaculars than an Irish Leprechaun. There was lighting in multiple shades of blue and red and clarity that embraced every phrase of every song, including a blue light about a song about a truckload of Viagra that accidentally got dumped into the water supply in Johnson, Tennessee that had the audience rolling between the tables in laughter.

Something beyond one show, however, goes to the management and board of Diamond Valley Arts Council. They continue to bring first-class entertainment and music to their rustic abode at 123 N. Harvard Street in the downtown center of Hemet. Their goal is to advance the arts and create community, and these folks they excel at both. Membership is $35 a year and is also the best entertainment value you will ever get. Just sayin’.

Search: Best show of the season