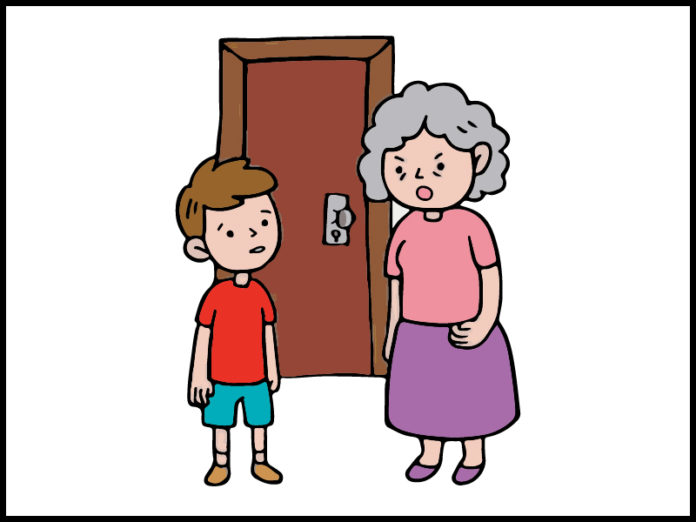 Grandma’s edict to separate my cousin Bill and me didn’t work.  They couldn’t keep us apart at school.  I devised a scheme.
“When you come down the holler, crawl up under the house, knock on the floor and I’ll meet you around the corner.”

Bill agreed that was one clever idea. So when he came down from the holler, he’d crawl under the house and rap on the living room floor. Usually, Grandma would be back in the kitchen or in her bedroom. I lived in the front room, where I slept on the sofa.

“See who’s at the door, Raymond.”
“Ain’t nobody at the door.”
“I  heard a knock.”
“Nobody knocked, Grandma.  You must be hearing things.”
“Don’t be sassy and don’t you be up to no tricks.”
“Grandma, I’m readin’ a book.” I waited a few minutes; I said, “Grandma, I’m going down to the A&P to see if I can make some money carrying groceries.”

“All right, but don’t you go gettin’ in any trouble.”
I was out the door to meet Bill without a wagon.
That arrangement went on for a couple of months, then I got into a disagreement with Grandma and moved back in with my mother.  No more knocking on floors. One morning Bill came by after mom had left for work.  Must have been about seven.

“What’s up with you? I asked.  “Kinda early ain’t you?
“What to hop a freight?
We both had itchy feet, always wanting to go somewhere we’d never been. Usually, mom paid our way back, but not always.  We were notorious freight train hoppers often climbing onto a boxcar for a short ride and hopping off at the edge of town, then hiking back home through the woods.

Meanwhile, the train continued to pick up speed. We climbed down to where the cars hooked up. When the train moved a gap appeared in the connection between the cars. As we breezed along, I let my left foot slip down into that open space. That’s where it rested when the train started to slow down. In a flat second my foot might have become mashed potatoes. I barely managed to yank it out before the connection jammed, squashing my tennis shoes. We ended up in the railroad yards at Point Pleasant by the Ohio River, seventy miles from home. Broke, tired and hungry, we went into a service station where the attendant took pity and gave us baloney sandwiches and glasses of milk. I called my mother, long-distance collect.

“Go to the Greyhound station in Point Pleasant.  There will be two one way tickets to Charleston waiting for you.” We didn’t get to go right home, though. The next bus to Charleston wouldn’t be leaving until the next morning. We slept on hardwood benches in the cold waiting room. When our bus arrived in Charleston during noon-hour, Mom was on duty in the lunchroom.

“You look like drowned rats,” she said, slipping us into a back booth.  “When’s the last time you had anything to eat?”
“A baloney sandwich in Point Pleasant yesterday.” She ordered us hamburgers and fries. “When you’re finished eating, you get yourself home and take a bath. We’ll talk to tomorrow.” She turned to Bill, “Your dad will take care of you.” It surprised me she’d admit she knew us. We looked like tramps, filthy dirty from the coal soot that belched out of the engine’s smokestack, plus which, I had only one tennis shoe.

Mom never whipped me that time, but I wasn’t allowed out of the house for a month except to go to school and believe me when my mother said a month, she counted the days.

Rivers were an integral part of my youth. I had a great love of water and fishing. Bill and I would walk, hike, or hitch a ride to find a fishing spot. Fortunately, West Virginia abounds in Rivers and creeks – where every kind of fishing imaginable is available.  The Elk River is known to have the most species of fish than any other river in the country.  I can still hold my own with a rod and reel, but I was a late bloomer when it came to flapping my water wings.