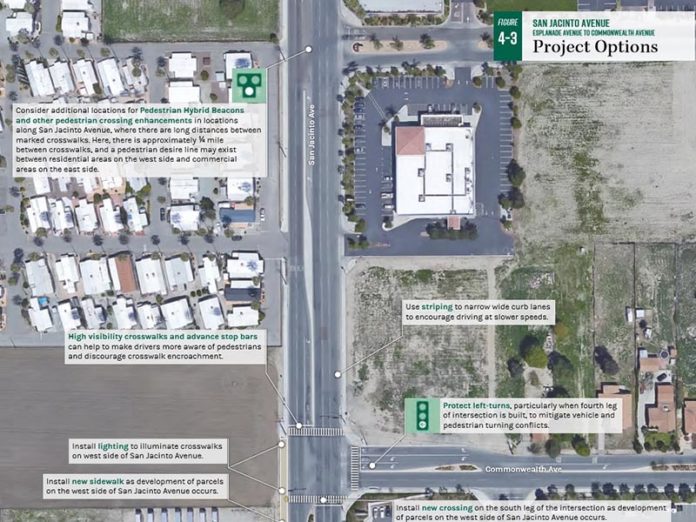 (How safe is it to walk)

San Jacinto requested an audit that gives you the answer.

Some months ago, San Jacinto requested that the Safe Transportation Research and Education Center at the University of California, Berkeley conduct a “Complete Streets Safety Assessment.” They recently reported their findings. The report was extensive: 88 pages to be exact.  What follows is a condensed version.

The rankings given by the CSSA range from 1 to 94, with 1 being the worst. In most of the categories, San Jacinto was middling and ended with a score of 38. SJ ranked particularly high in a lack of pedestrian deaths and particularly low in DUI accidents in the 21+ demographic.

First we look at the objective of the report and how to go about evaluating the findings. What San Jacinto requested was a Complete Streets Safety Assessment or a CSSA. The objective of a CSSA is to improve safety and accessibility for all people walking and biking in the City of San Jacinto. To begin the process, the CSSA team conducted a pre-visit phone interview with city staff. The results from that interview provided the team with benchmarks to analyze and from which the CSSA team could move forward. The team then employed San Jacinto City employees to conduct walking audits at a number of locations. Participants were a mix of staff from different departments who were given an intro to pedestrian and bicyclist safety. From these audits, suggestions were drafted for potential improvements and specific improvements to locations.

Those city employees who participated are as follows; Habib Motlagh, Grace Alvarez, Rene Yarnall, David Clayton, Andy Ramirez, Curtis Cox, Carrie Best, Tim Hamlin, and Stuart McKibbin. The benchmarking aims to provide the City with information on current practices and point to which characteristics stack up against those of other cities. It is important to note that this report is based on limited observations and in a limited amount of time with only a general knowledge of pedestrian and bicycle design and safety. It is intended as a guide for the future improvements in roadways and sidewalks and may not consider all possibilities.

Midway Street and Esplanade were mentioned as having high travel speeds and to be missing crosswalks on both sides, as well as a lack of bike facilities. On 7th street the “clear lines” of the crosswalks were found to create a disorganized environment with several observed close-calls and conflicting turning movements into and out of driveways. The focus at Megan Cope however was on the que of cars that is created as well as the lack of bike lanes or other facilities. Students were seen biking on both the sidewalk and the street. More info can be found about each observed location and the report at the San Jacinto’s city council webpage. https://sanjacintoca.iqm2.com/Citizens/Detail_LegiFile.aspx?Frame=&MeetingID=1221&MediaPosition= &ID=1425&CssClass=

Search: How safe is it to walk